A Call from the Wild | Jackson Free Press | Jackson, MS

A Call from the Wild 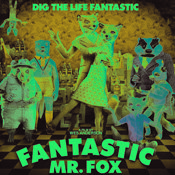 "Fantastic Mr. Fox," a film for all ages, is currently in theaters.

"Fantastic Mr. Fox" is rare breed. It unfolds slowly and on its own time. It never drags; its pace is leisurely but well measured. The art style and stop-motion photography are as unique as the story; the low-tech but painstaking animation and cinematic puppetry works well in this uncompromisingly old-fashioned tale. Thoughtful and entertaining, "Fantastic Mr. Fox" is nothing short of fantastic.

George Clooney voices Mr. Fox as an aging rogue, untouched by the wisdom his years should have taught. Retiring from his days as a chicken thief, Mr. Fox settles uneasily into the quiet life with his long-suffering wife and unhappy son. But underneath his shirt and tie, Mr. Fox is still a wild animal, still a predator longing for the thrill of the hunt and the taste of blood. Accompanied by his friend Kylie, a dim-bulb opossum, and his adroit but mild-mannered nephew, Kristofferson, Mr. Fox dives once again into a life of crime, quickly crossing paths with three hotheaded and cold-blooded farmers.

Cautionary in tone and subtly didactic, "Fantastic Mr. Fox" is in many ways a coming-of-age tale, albeit one intended for an older generation. Mr. Fox thinks himself an island. He longs to live life on his own risky terms, unfettered by the rigors of responsibility; but when his nocturnal escapades reap deadly rewards, he soon comes to realize that his foolhardy actions have consequences, not only for himself, but also for his family and even his community.

Despite this call to the conventional, the film exudes an essential savagery that's impossible to ignore. The animation itself is alluring but unsettling. Like watching a sleek fox in the wild, there's beauty and danger balanced on a razor's edge in every frame. The textures are realistic, but the movements halting. There's something so real about this world, and yet not quite so.

It's an eerily hypnotic effect. At times, you can get lulled to complacency, settling into that comfortable anthropomorphic paradigm we've all come to know from the boundless menagerie of animated fare. But then, just when it all seems safe, the animals will ravenously devour a plate of food, brutalize a chicken, or hiss and spit and claw at each other in a fit of rage.

Dress a fox (or a man for that matter) in a suit if you must, but you can never do away with the primal ferocity buried just beneath the veneer of civility. The film doesn't pass judgment. There will always be a vestige of the wild that remains; that no amount of training or responsibility can tame. It's realityit's not right or wrongit just is.

The superb voice cast immeasurably aids Wes Anderson's adaptation. Meryl Streep, as reliable as ever, delivers a hauntingly understated turn as Mrs. Fox. She's calm and gracious in the face of adversity, her criticism of Mr. Fox's irresponsibility all the more withering given her even temper and quiet spirit. Owen Wilson and Bill Murray (both frequent collaborators with Anderson) are excellent, if underused, in smaller roles.

But the film truly belongs to Jason Schwartzman and Eric Chase Anderson, whose considerable talents bring Ash, Mr. Fox's bitter but essentially kind-hearted son, and Kristofferson to full and vibrant life. Their understated performances are real gems, infusing the picture with an extra dose of smart and savvy storytelling.

The movie's soundtrack is similarly unconventional, combining original works with tunes from The Beach Boys, The Rolling Stones, and even the quant mid-century semi-mythical hit, "The Ballad of Davy Crockett." It's an odd play list, but one that's not only consistent with the film's quirky sensibilities, but artful as well.

Sandwiched between lumbering holiday blockbusters, "Fantastic Mr. Fox" may be doomed to live a quick and quiet life; and that's a shame because it is one of the most unique pictures I've seen all year. There's something nostalgic in its method and message, and yet something attractively dangerous about its presentation. The stop-motion canvas reminded me of the "Wallace and Gromit" adventures, but this is more like Wallace's and Gromit's switch-blade cousin. There's a similarity at the core, but the edges are rough and worn. It's not that "Fantastic Mr. Fox" doesn't have a good heartit just doesn't have a timid one.

Will Morgan is never far from a screen and writes from Madison. You can read more of his reviews at http://www.parents-kids.com/media_matters/.