Under Pressure: Fighting to Keep ‘Choice' In State 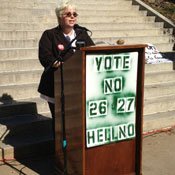 Shelley Abrams is fighting the state of Virginia's attack on abortion rights. Earlier this month, she was arrested on the steps of the state capitol in Richmond, Va. She oversees several clinics that provide legal abortion services, including one in Virginia and several other southern states. Abrams is also executive director of Jackson Women's Health Organization, the only abortion facility in the state.

It may be too soon to predict that the Jackson clinic will have to close July 1, the date Mississippi's new anti-abortion law goes into effect.

Gov. Phil Bryant signed House Bill 1390 earlier this month with a goal of closing down this last clinic in Mississippi. The new law requires abortion clinic doctors be board-certified in OB-GYN and to have admitting privileges at a local hospital.

Abrams didn't comment on any relationships the clinic now has with particular hospitals. She also didn't want to discuss the ownership of the clinic or the other clinics she oversees. The reluctance comes from a fear for the lives of the doctors and staff who provide abortions.

It's going to be very hard to get admitting privileges.

Some of your doctors come from out of state to perform abortions. Is it harder to get admitting privileges if they are out of state?
Hospitals aren't required to give doctors admitting privileges. Jackson is a small town.  If (the anti-abortion groups) knew a hospital gave privileges, they would put pressure on them to terminate our agreement. There's too much social pressure in Jackson.

The state already comes into our clinic all the time to review documents.

I can't even imagine. I have no plans of that clinic to shut down. How I'm going to do that, I don't know. I can't fathom no abortion access in Mississippi.

But some doctors will have a patient who wants an abortion, and so the doctor might suggest a D&C or some other procedure and that's what goes in the medical records instead of an abortion. That happens, right?
When a miscarriage occurs, you do have to file a statistics form with the state. A private doctor might say, "Oh, it looks like you are having some bleeding" and then perform a procedure.

What's your next step?
The next step is trying to get admitting privileges. Obviously, the cost of taking a constitutional case to the Supreme Court is cost-prohibitive. If a national organization chose to take this, we would be there. The Supreme Court is a scary place to go.

Any doctor who works in our office is licensed in the state of Mississippi. They have to go before a review board. These are highly qualified physicians. Gov. Bryant is thumbing his nose at the medical board. I think that he is taking the tactic that most of these (anti-abortion) politicians take—"We are just looking out for you little women."

There are points he doesn't understand. One, we are a quarter of a mile from University (of Mississippi) Medical Center. Two, any patient who must be taken there is taken there.

Everything he said while signing that law was a lie.

I assume that St. Dominic, a Catholic hospital, wouldn't give your doctors admitting privileges. Is there political pressure at UMMC? It is a state-owned facility.
Catholic hospitals have massive pressure. I'd be shocked to find out any abortion providers nationwide have admitting privileges.
You would think the university hospital would be the least politicized in theory. We hope they meet with our doctors and reach an agreement.

Is there something that you would really like to stress about any of this?
When your own government can turn against you, you have to take action. You have to. This is not a time to be complacent. The government is trying to limit your access to abortion.

Gov. Phil Bryant did not return calls to respond to Abrams' remarks as of press time.