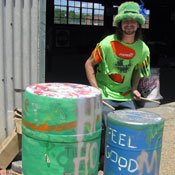 Whitney Grant looked down the narrow path between two long lines of people. Blocking her view were wide-open palms gently waving and waiting for her. She ran down the high-five gauntlet, slapping hands, getting and giving high-fives and connecting with other participants at last year's FIGMENT Jackson, an arts event heavy on participation. It was exhilarating. "I think I went through twice," Grant said.

Just a few minutes later, almost in the time it took the participants to gather and create the gauntlet, the lines dissipated and left no trace.

Grant is an organizer of this year's FIGMENT Jackson event April 28 and 29 in the Midtown Arts District. The free event pulled in more than 1,300 last year at the old Coke plant on Highway 80.

"It was a variety of experiences. We had everything," she said. "It was two days of wandering and having unexpected experiences."

The event is free, a point Grant stresses. "Even if we charge $1 to get in, that would exclude someone," she said. FIGMENT has no corporate sponsors, and no artists are allowed to sell art at the event. The concept is inclusion and noncommercial celebration. It's not a cold gallery of submissions to look at.

"The idea is (that) everyone is an artist," Grant said. "It's not an evaluation of art; it's not art just hanging on walls."

Last year, little children played in a plastic wading pool filled with flower petals instead of water. Journals and notebooks and pens and pencils dangled from tree branches inviting passersby to stop and write a note about dreams and wishes. With each new crawling participant or curious poker, a large modernistic monkey-bars structure created new light shows and musical tunes.

FIGMENT is not just for children, but you will want to play like a child. Interactive means more than observing others who create.

"It's kind of like a potluck art party," Grant said. "It's really the most grassroots thing I've ever been a part of."

FIGMENT is a multi-city arts festival that started in New York City. Now, the festival happens in Detroit and Boston as well as Jackson. David Koren, FIGMENT project executive producer and founder, calls it participatory art in the public realm.

Artists will have booths with activities everyone can take part in. Grant and the other organizers set up the place, date and time, and they help applicants with the basic needs for each interactive idea. Some will need access to power, like the monkey-bar sized musical instrument from last year's event.

FIGMENT will block off Wilson Street for several outdoor projects, but expect many indoor installations as well. When Grant talked to the Jackson Free Press, she was still expecting more entries and couldn't describe any new projects. The organizers approve most projects, making suggestions on how to make some even more interactive. They accept just about any idea, as long as it isn't dangerous.

Planning the logistics and support for FIGMENT has been time intensive. The first meeting for this year's event was held in October. One of the big jobs is writing grants to pay for the free-to-the-public events. Even though the organizers charge nothing, some necessities still cost money. The organizers also have to consider the cost of security, insurance and some legal paperwork. Some professionals donate their services to the cause.

"Everything is done on a volunteer basis," Grant said. Every Wednesday for the past couple of months, the core team of volunteers has met on site in Midtown. FIGMENT organizers provide the infrastructure.

One of the largest challenges FIGMENT Jackson organizers face is getting the word out. "It's difficult. We have some money left over from last year that we are using for advertising," Grant said.

FIGMENT Jackson chose Midtown as its focus this year to make something positive happen where it's not the norm.

"We want people to come and be ready to unleash their creative side," Grant said. "Drop your inhibitions and enjoy yourself."

FIGMENT Jackson 2012 is Saturday and Sunday, April 28 and 29, in the Midtown Arts District. FIGMENT Jackson's central node is at the North Midtown Arts Center (121 Millsaps Ave.) And will expand into Millsaps Avenue, Wilson Street and McTyere Avenue as necessary. North Midtown is located south of Woodrow Wilson, west of Millsaps College, east of Mill Street and north of Fortification Street. Hours are noon to dark Saturday; 11 a.m. to 6 p.m. Sunday. Free. Visit http://jackson.figmentproject.org.

i'll be conducting the Midtown FIGMENT Debris Organization so stop by and lend a hand collecting or organizing!