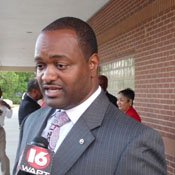 Dennis Carpenter speaks to reporters after a forum with finalists for JPS' superintendent search.

At the forum, Carpenter described his leadership style as collaborative and data-driven. He said he doesn't have a plan of action right now or a silver bullet to fix JPS' problems, but he would research and find out what works to improve schools in Jackson.

Cedrick Gray is the superintendent of Fayette County schools in Tennessee. He was also a principal in two Memphis schools.

"I have a myriad of experiences, and they're really all connected to turning around under-performing schools and creating an environment of nurturing and excelling academically," Gray said.

Both men answered questions submitted by the audience, beginning with a question about how they plan to combat JPS' negative image.

Carpenter said he would ask the district's public-relations department to get the word out about good things happening in the district.

"I think too often school districts allow others to tell their stories for them," he said. "... Everywhere there's a challenge, we should be ready with some strategies to talk about."

Gray emphasized getting parents and others in the community to speak up about the positive things going on in schools.

"Standing outside, I walked into three proud Jackson State University graduates, and the first thing or the second thing they said after introducing themselves is, 'I graduated from Jackson State University,'" he said. "That's the same thing that we can do with Jackson Public Schools. There's no difference; we just have to learn to grab the positive and begin to promote it."

The JPS school board also interviewed the candidates yesterday and held a closed-door meeting after the forum, but has not announced a new superintendent, yet.