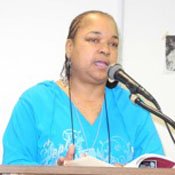 Meredith McGee spoke at a United Nations panel on the status of women last month.

"When I saw the yellow pads, I realized she needed it written," said McGee, who owns a typing service in Jackson. She ended up co-authoring "Married to Sin: A Memoir," a book about Collier's experiences growing up in poverty in rural Mississippi.

Collier's mother died when she was young, and her father had substance-abuse problems. Her family struggled with hunger, a lack of education and sexual abuse.

"Incest is a very, very serious problem in rural Mississippi," McGee said. "It's not just as isolated as most people think."

Writing about Collier's story has led McGee to hear more stories from women around the state and country as she goes to book signings and other events. Last month, she read excerpts from "Married to Sin" at a United Nations panel on empowering rural women in poor communities.

"When I read these excerpts from the book, a lady from Nigeria got up, and she was shocked. She said when she sees American women on TV, she thought that American women were wealthy," McGee said. "She didn't know that American women, rural or otherwise, suffer from poverty or sexual abuse--the kinds of things they suffer with."

McGee said the stories of women living in abuse and poverty have similarities that cut across racial lines and national borders. Women have told her about cycles of low self-esteem and abuse, as well as trouble finding enough water to grow crops. Some women from rural areas said the food and help never really get to their areas.

It's also hard for their stories to get out.

"The stories are just really heartbreaking because they're so complicated," McGee said. "Do the people who really can make a difference know all of these things are happening all over the world?"

McGee has also written a biography of her uncle, civil-rights leader James Meredith, which will be published by Praeger this summer. She lives in Jackson with her husband, William McGee Jr., and their son, William McGee III, is a freshman at Jackson State University.

Elizabeth Waibel - I appreciate the article. http://www.abc-clio.com/product.aspx?id=2147511966 Here is the book's product page with a cover.