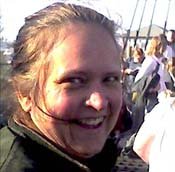 My husband balanced a lumpy, orange sweet potato in one hand. His other hand was poised on the juicer. He arched an eyebrow while I tried to keep my mind open. The sweet potato was way too large to fit in the juicer, so he cut it in chunks and fed it into the slender cylinder. I watched, knowing I would have to drink the juice and not react in any negative way. The juicer pulverized and liquidated the sweet potatoes in mere seconds.

He threw in an entire lemon, an apple or two and part of a cucumber. The lemon-zest aroma filled the room and opened my mind a little more. I think he added carrots to this concoction. I'm pretty sure he started it out with a large bunch of dark green and curly kale. He poured me a glass of the rich, earthy mix and watched me take my first sip.

I honestly and surprisingly liked it. It was sweet and tangy and intriguingly different, although the starchy aftertaste from the sweet potato was odd. I wanted more of the lemony freshness. And then I got a surging buzz that seemed to make me feel more energetic than an oversized cup of strong, bold coffee. So, of course, I wanted more.

Ever since he bought the juicer a few months ago, I have considered going on an ill-advised, crackpot, last-ditch, all-juice diet. I haven't had the nerve, yet. Three days into any new regimen, I tend to get headaches. If I cut all caffeine or reduce carbohydrates, my head rebels. The first day, I am full of hope and optimism. The second day, I am proud of the discipline it took to make it this far. (Yes, you are correct--it is pathetic, but 24 hours of good behavior is a big deal for me.) By the third day, my head hurts.

I've tried different diets, from the insane ones in my 20s, to the extreme cost-cutting budgeting to feed my family in my 30s, to the "I-just-want-to-feel-a-little-better" realistic attempts to eat healthier that I am aiming for at the end of my 40s.

The power food holds over us is primitive. We are all just animals, but sometimes when we remember that, the simple truth astounds us. The first time you lock eyes with your nursing newborn, you suddenly remember the obvious. Like a newly zealous teenager taking communion wine and crackers with religion exploding in his temporal lobe, the epiphany of the simple truth hits you at pivotal moments in life. From our family feasts to our first dates, our rites of passage revolve around food rituals that shape the way we think and feel. When we need comfort or love or good vibes, we remember what fed us in the past. Food has that power over us.

How many times in just the past 20 years have we read about starving people in Africa and then learned that warlords blocked logistical efforts at every road to deliver food? These men controlled basic human sustenance to gain political power. Corporations have controlled access to food so their shareholders could realize a larger profit. More than 30 years ago, Nestle taught breast-feeding mothers in Africa to give up that animal habit and instead use a powdered replacement. Unfortunately, the tainted water the mothers used in some cases created toxic baby formula.

But that's not the only instance in history where corporations put profit before basic human survival needs. Monsanto's control over who can own and buy its patented, genetically modified corn seeds, for example, has destroyed the lives of some farmers and has left many of us wondering if genetically altered food is going to destroy us all. Yet, we keep buying, cooking and eating those foods. Well, maybe you don't, but I sure do.

My scientific understanding of a lot of things is limited. But I know this simple truth: If I keep eating processed, packaged, corporate, altered and unhealthy food, I'll die a lot sooner than I should.

That's the kind of power food holds over us.

As the African warlord knows all too well, food is a resource that can control economics. And it's not just foreigners who deal with the effects of people who manipulate this resource. In 2010, about 15 percent, or 17.2 million American households experienced "food insecurity," or did not have enough food to sustain an active, healthy life for all household members, reports the United States Department of Agriculture.

The power food has over our economy shows up in the medical industry, too. A rise in diabetes, heart disease and other metabolic problems has improved profits for some pharmaceutical companies while stressing health-care systems and burdening taxpayers.

The answers seem so simple. Why can't we all have gardens or barter with small farmers? Why can't we drink more water and eat less junk food? Why have we complicated the simple act of grabbing an apple from a tree or catching a fish for dinner?

I remember an archaeologist telling me once that the first French settlers in Biloxi didn't starve because mountains of oyster beds littered the Coast. But then later, when University of Southern Mississippi archaeologists examined the remains of those first European settlers, their bones made it clear these people died of starvation. It's a riddle I want to solve as well as my own confusion about the simple act of eating well.

Part of my problem is that eating is sensual. The smells, the textures, the sensations that accompany the different tastes are sometimes addictive beyond the complicated internal chemistry. Food comforts us and makes us feel loved. Or it invigorates us with energy to get things done. Or it makes us feel successful when we treat ourselves to a special delicacy.

I love it when my husband makes me juice. I think it's a healthy thing, but I'm no expert. I just feel better when I drink the juices he creates. But he's also offered to grill me chicken every day when he retires. That appeals to me on so many levels. I do love chicken, and I do love his grilling.

The most appealing thing about it, though, is that he would want to do that for me. It's simple and powerful, and I think I'd like to live a long time so he can do it.