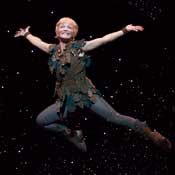 For many girls growing up in the late 1960s and early 1970s, Cathy Rigby was the petite Olympic gymnast with blonde pigtails who popularized the sport in the United States. For children growing up since then, Rigby is best known as Peter Pan.

"I've probably done this show a thousand times," Rigby said in a telephone interview from her Southern California home. "I wouldn't do it if I didn't love it."

Rigby, now a fit and youthful grandmother, will bring her production of the musical "Peter Pan" to the Thalia Mara Hall in Jackson Sept. 20-21 as part of the "Best of Broadway" series.

Rigby has played the role off and on since 1974, when she was 20 and a year into her retirement from gymnastics. She had never acted, couldn't really sing and was so shy she could barely look people in the eye. But she soon discovered that she actually enjoyed the high-flying role, first performed on Broadway in the 1950s by the legendary Mary Martin.

Determined to succeed in her new career as a performer, she took voice and acting lessons for seven years, and ballet lessons for 12 years.

Her toughest critic was probably the late Betty Comden, who wrote the lyrics to the musical. Comden told the Associated Press in 2004 that she had grown to love Rigby in the role. "She captures the spirit of what Peter Pan is all about, the imagination involved in it. And she's also a wonderful physical performer," Comden said. "I tried flying in one of those harnesses, you know, and it's not easy."

Rigby grew into the role so well, she was nominated for a Tony Award in 1991 for a Broadway revival of the show. In 2004, the League of American Theatres and Producers Inc. presented her with the National Broadway Theatre Award's Distinguished Lifetime Service Award.

Recently, Rigby filmed an "American Girl" movie based on one of the popular dolls, but she can't say anything more about the movie, yet. She has also played Dorothy in a production of "The Wizard of Oz," appeared in national tours of "Meet Me in St. Louis," and "Paint Your Wagon," and starred on Broadway as the Cat in the Hat in "Seussical The Musical." Her signature role remains Peter Pan, the boy who never grew up.

"It's just so exciting to be part of something so positive," Rigby said. "The great thing about knowing the show so well is you can continually reinvent parts of it."

She loves chatting with her young fans after a performance, and meeting parents who saw her in the show when they were children themselves.

"Now they watch the show through their children's eyes," she said.

The discipline Rigby learned as a gymnast has enabled her to remain strong and healthy enough to don green tights and fly around the stage in a harness, even though she will be 59 in December. Rigby competed in the 1968 Olympics in Mexico City and the 1972 Olympics in Munich. She won a silver medal on the balance beam in 1970 at the world championships, becoming the first U.S. gymnast to medal in international competition.

After she retired from competition, she joined ABC and for 18 years was a commentator on the network's gymnastics coverage.

This production of "Peter Pan" will keep Rigby on the road for more than a year, but she doesn't mind the travel. "I enjoy touring. It certainly has its challenges, but it's easier now," she said. "My children are grown-up, so if they want to fly out and join us, they can."

Rigby and her husband, actor, singer and producer Tom McCoy, formed a production company, McCoy Rigby Entertainment, and together they have produced many seasons of musicals, plays, concerts and special events at the La Mirada Theatre for the Performing Arts in La Mirada, Calif. Rigby and McCoy also run a conservatory where 700 children study the arts. Their four children are in the entertainment industry, with two working in the production office, one in the "Peter Pan" crew and one dancing with a troupe in Germany.

Rigby loves the excitement of performing in front of a live audience, when anything can happen. "The audience is part of that participation," she said. "It's live; it's an adventure and experience we all explore together."