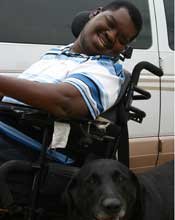 When people told Leron Jackson he couldn't make it, he never believed them.

"Anyone can do something to make a mark in this world," says the 33-year-old Carriere native. Jackson has been living with cerebral palsy his whole life, but he hasn't let his disability hold him back. He received his bachelor's degree in criminal justice and correctional services from Jackson State University last December.

As a teenager, Jackson began working for his mother, Hollia Thompson, now 50. She has worked for the Arc of Mississippi, an advocacy organization for citizens with cognitive, intellectual and developmental disabilities, since the family moved to Byram in 1983. Today, Jackson does advocacy work for people with disabilities and is a motivational speaker with the organization.

"Knowing about the things I went through inspires people to go out and do great things," he says, "The work grew on me and made me the person I am today. I'm happy my mother got me out there."

Thompson saw that her son had a gift. "He has the ability to channel energy to help others," she says, "I've never met anyone with more perseverance and sense of self."

Jackson learned self-advocacy at the National Youth Leadership Conference in 1997, where he has since served on the planning committee. His admission essay earned him a chance to meet Pres. George W. Bush, who was looking for a person with a disability to accompany him when he signed the Americans with Disabilities Amendments Act in 2008. Bush liked the language Jackson used in his essay and quoted from it in his speech.

After that experience, Jackson began a youth leadership conference at home. Mark Smith, executive director of the Coalition for Citizens with Disabilities and one of Jackson's greatest inspirations, directed that effort.

Jackson's quest for a quality education has met with great opposition over the years. He had to fight for that right. Still, at the Jackson State University graduation this spring, Jackson was not allowed to walk with his class.

"It has definitely been a struggle," he says. "So many people thought I couldn't do it. Sometimes, they'd knock me down to where I didn't want to get up. Now it's my job to pick people up."

He thanks his family and his unshakable faith in God for all he's accomplished.

"All his struggles gave him the strength to do what he needs to do," Thompson says.

Jackson wants to study disability-rights law, and he intends to pursue a career in it while continuing to advocate for people with disabilities. "It goes to show that you should never tell anyone they can't make it," he says. "I'm a living testament that they can."