Inflated Sense of Self 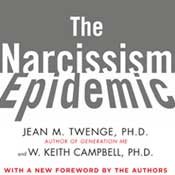 When I first saw Jean M. Twenge and W. Keith Campbell's "The Narcissism Epidemic: Living in the Age of Entitlement" (Simon & Schuster, 2009, $15.99), I think I actually groaned.

I recognized the book for what it was: my father's thinly veiled ploy to influence my budding mind. He often gives readings on a variety of topics. I both dread and enjoy these "assignments"; they ultimately teach me something.

He'd been talking about "The Narcissism Epidemic" for days, applying elements of its discussion on self-centeredness and hyper-confidence to our everyday lives.

"You're such a narcissist" became the most common saying in my household for about a week. Around this time, I decided that I wanted to know firsthand what my father had been talking about. I didn't anticipate so greatly enjoying being influenced.

"The Narcissism Epidemic" likens an inflated view of the self to a disease that is quickly spreading throughout America. Public figures say it's what makes them stray from their spouses. Parents teach it by dressing children in "Princess" T-shirts. Teens and young adults hone it on Facebook, and celebrity media have elevated it to an art form. Narcissism, the authors say, is what's making people today depressed, lonely and buried under debt.

"Understanding the narcissism epidemic is important because its long-term consequences are destructive to society," the authors wrote in the introduction. "American culture's focus on self-admiration has caused a flight from reality to the land of grandiose fantasy. We have phony rich people (with interest-only mortgages and piles of debt), phony beauty (with plastic surgery and cosmetic procedures), phony athletes (with performance-enhancing drugs), phony celebrities (via reality TV and YouTube) ... and phony friends (with the social networking explosion). All this fantasy might feel good, but, unfortunately, reality always wins. The mortgage meltdown and the resulting financial crisis are just one demonstration of how inflated desires eventually crash to earth."

Psychologists Twenge and Campbell analyze narcissism through every facet of American culture, leaving no social practice untouched. In keeping withthe theme, the authors treat narcissism as a disease of epic proportions, structuring their discussion in terms of diagnosis, root causes, symptoms, prognosis and treatment.

The first section of the book defines narcissism, describing the disease of excessive self-admiration. Twenge and Campbell challenge some myths about the benefits of narcissism in our competitive world—such as narcissists' high risk tolerance and the fact that school test scores have hardly increased over three decades—and trace the origins of the epidemic.

Section two, addressing the spread of narcissism, deals with parental accountability in "raising royalty," celebrity and media transmission, the quest for attention facilitated by the internet and the rise of easy credit.

The next two sections describe the narcissistic individual's behavior, personality and ideals. Then, Twenge and Campbell introduce their treatments for the disease: promoting awareness and behavioral change.

The authors present this information in an easy-to-comprehend manner. The book reads quickly and fluidly, explaining tough concepts simply.

"The Narcissism Epidemic" changed the way I view the world. I find myself actively trying to change the way I approach certain topics or do certain things. It's well written and informative, a good read for anyone interested in how today's society works.