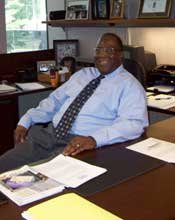 On Sundays, Ronnie Agnew and his eight brothers and sisters piled into his father's 1967 Buick LeSabre and headed to church. "My mom and dad were very religious," he says. They didn't let the kids watch a lot of TV, but they watched "Sesame Street" when it hit Mississippi Educational Television in 1970.

"If you grew up in the country without cable, ETV was big," Agnew says. "Kermit and Big Bird were family members."

As a child in Saltillo, Miss., Agnew shared a bedroom with his brothers. It made them close as adults, said Agnew, now 48. "We are crazy about each other," he says. Most of his siblings have moved out of state, but Agnew remains.

In August, Agnew became executive director of Mississippi Public Broadcasting after more than nine years as the executive editor of The Clarion-Ledger. His last official act for the Gannett Co. Inc. newspaper was a presentation at the National Association of Black Journalists in early August in Philadelphia, Pa.

Back in Saltillo, a teenaged Agnew saw sportscaster Bryant Gumbel on TV. "That's what I want to be," he says. He went to the University of Mississippi majoring in radio and television. One of his professors, Will Norton, encouraged Agnew to go into print journalism. Agnew calls Norton "my mentor."

Before he graduated from Ole Miss in 1984, Agnew started working at The Greenwood Commonwealth. At The Cincinnati Enquirer, a Gannett newspaper, he got a huge opportunity in 1986. "They trained me at 27 to be assistant city editor," he says.

Agnew says he doesn't have a lot of plans for MPB, yet. He has a lot of "self-imposed" homework. "I inflict a little too much pressure on myself," he says.

After his first week at MPB, his wife of 25 years, Cynthia, 47, noticed an immediate change when he wasn't carrying a laptop. The Agnews have three children: Rachel, 16; Victoria, 18; and Christopher, 20.

The MPB staff impresses Agnew. He'd like to continue and expand programs such as Job Hunters and the high-school football games. "We have a responsibility to be smart with all our finances," Agnew says. "The more money we can raise, we can tell Mississippi stories."