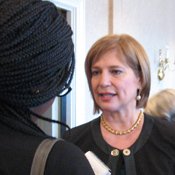 Connie Moran, Democratic candidate for treasurer, promised to keep the Public Employees Retirement System intact if she is elected.

"There will be no tinkering with the 13th ... cost-of-living-adjustment check, and I am not in favor of morphing it into a 401(k) type of system," she said.

Moran, who is mayor of Ocean Springs, spoke at the Stennis-Capitol Press Luncheon yesterday. She is running against Republican Lynn Fitch, who cited a previous commitment and was not at the luncheon.

"My opponent, as you know, is a Haley Barbour appointee to the state personnel board, so who will my opponent march to on this issue if elected?" Moran asked.

Fitch released a statement last week saying she will continue to support PERS and its commitments to those in the system and retirees. She also promised to protect the 13th check.

PERS became part of this election season's debate after Gov. Haley Barbour appointed a commission in August to study PERS and its long-term sustainability. Despite repeated assurances from politicians and members of the study commission that the state will keep its promises to current retirees, some employee advocates worry that the commission will recommend reductions in benefits. The state has a contractual obligation to current and retired employees, but could change the system for future hires.

The timing of the presentation makes speculation and uncertainty about the future of PERS part of the political debate surrounding the statewide election. The study commission will present its analysis of the PERS system and recommendations Nov. 15, after the election.

Moran earned her master's and bachelor's degrees in finance and international commerce from Georgetown University in Washington, D.C. In the 1990s, Moran served as managing director for the Mississippi European Office in Frankfurt, Germany, recruiting new business and industry to the state for the Mississippi Development Authority. She also worked as an economist at the World Trade Organization in Geneva, Switzerland.

Moran also said she plans to vote against the three ballot initiatives--personhood, eminent domain and voter ID. Responding to questions from the press, Moran said the initiative to curtail the state's ability to use eminent domain to transfer land to private developers could damage the state's chances of attracting companies and industries.

"With my background in economic development, I think it's important that the state have the opportunity for the right type of investment, especially for manufacturing, that's going to create high-paying jobs--that's the No. 1 tool," she said.

Moran said while she was working at Mississippi's European office in Germany, she tried to get Mercedes-Benz to locate an assembly plant in Mississippi. The state lost the plant, Moran said, because Alabama quickly put together an incentives package including 30 parcels of property.

It looks like all our democratic candidates have an uphill battle with the statewide ballot this year. I reached out to her campaign but I never heard back from her. All of us can't give money, but I sure don't mind making phone calls....