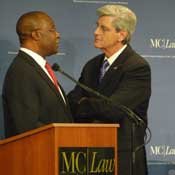 The two candidates for governor in Mississippi talked up bipartisan cooperation and downplayed their differences at a debate Oct. 14.

Lt. Gov. Phil Bryant, a Republican, and Hattiesburg Mayor Johnny DuPree, a Democrat, carefully avoided any appearance of negative campaigning or attacks on their opponents, which resulted in a chummy atmosphere and little substantive discussion of issues that set the two men apart.

DuPree and Bryant answered questions about partisan gridlock, health-care reform and teen pregnancy at the only scheduled debate between the two nominees. The Mississippi College School of Law hosted the televised debate, and AARP sponsored it.

On most issues, the candidates' views seemed to vary little. Regarding how to reduce the number of teen births in Mississippi, both emphasized the community's role in teaching teens to wait until they are older to have children. Bryant said last year's law requiring school districts to adopt a sex-education policy will allow schools—in some districts, at least—to teach abstinence-plus sex education.

"If a parent agrees, we can teach more science to a child, so that those children understand what can go wrong," he said. "... But again, I think we need to say to parents and grandparents alike: 'I am not individually responsible for what happens to your child. Now, we all have a shared destiny, but you have to step up.'"

DuPree, who said his wife and he started out as teen parents, said the church, the educational system and the community must work together to help teens, as people did when he and his wife were young parents.

"This teen pregnancy issue is not something you're going to solve overnight," he said. "... It's going to take education in order to do that, it's going to take, again, the community to pull together."

Bryant and DuPree did differ on the health-care reform bill that Congress passed last year.

"I'm extremely concerned with the 'Obamacare' health care, as some people call it," Bryant said, adding that the act will add 400,000 Mississippians to the Medicaid roll.

"You've got to realize, we've got 640,000 Mississippians now on the Medicaid roll; that's a million people in a state of 3 million. ... That's impossible to afford," he said. Bryant said the state contributes 25 percent of Medicaid expenses; however, under the reform bill, the federal government would pay 100 percent for individuals at or below 133.3 percent of the federal poverty level beginning in 2013.

Bryant touted a health-care exchange, nationwide tort reform and job creation as the best ways to bring down the cost of health insurance. He also criticized the act's controversial individual insurance requirement, calling it a violation of civil liberties.

DuPree said some aspects of the health-care reform act should concern people, but it will bring in $20 million to help uninsured people in the state get insurance. He said the bill makes a health-care exchange possible.

"Without the $20 million, it wouldn't happen, and we would still be talking about what we are going to do with the half a million people in Mississippi (without insurance)," DuPree said.

I think Dupree needed more coaching for this debate. He seemed nervous and unsure of himself at times. For this to be the only debate, and for him to be such an underdog, he should have seen this as a "make or break it" point in his campaign. On the points where he differed from Bryant, he seemed to be apologetic for opposing Bryant, rather than confident that his perspective was best for Mississippi. Bryant had so many falsehoods and fear born rhetoric about Healthcare reform that Dupree should have shown no mercy in debunking the myths and showing that the “Conservatives” fears about Healthcare reform are just corporate talking points with no real alternatives or solutions that are workable. But, Dupree merely accented to the fear and ignorance that says that Mississippi won’t be able to insure all eligible citizens. Very disappointing. If I weren't so concerned about what a Phil Bryant governorship would do for the poor and minority citizens of the state, I would probably sit this election out. Dupree did nothing to distinguish himself as a progressive candidate. Maybe he doesn't want to be seen as such in "conservative" Mississippi, but he will not win running as a conservative Mississippian who happens to be black. His only hope is a massive new voter turnout that literally changes the electorate. But, that population saw nothing that would motivate them to turnout in record numbers to the polls. Overall, I was underwhelmed by his debate performance and in his campaign in general. I know that there is a grassroots groundswell of new voters that will be voting in November, but I don't think that is going to be enough to give the Governor’s office to Dupree. I pray sincerely that I am wrong on this, but I doubt it.

I was disappointed as well. Where was the discussion of the issues? Who are undecided voters supposed to vote for if you don't tell us what you disagree on and why? You don't have to come out slinging mud to take a different stance from your opponent on an important issue.