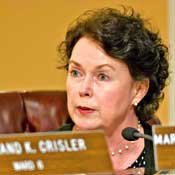 The city will purchase land from TCI, the company that will develop the hotel, but at a work session earlier this week, council members were frustrated by the lack of information about the land purchase. Currently, TCI owns the land, purchased in a deal brokered by former Mayor Frank Melton with friends from Texas who started TCI. The land, across from the convention center, has stood undeveloped since the last administration with the company's finances and ability to complete the proposed development in limbo.

Ward 7 Councilwoman Margaret Barrett-Simon said she cannot explain the deal to people when she does not have all the details herself.

"It's very difficult politically to be dealing with something like that if we are just getting details in ripples," she said. "The horse is out of the barn and ... we don't have any answers."

"The public doesn't know how many acres we're acquiring," Ward 1 Councilman Quentin Whitwell said. "Help me help you. I can't argue something back to the public if I don't know. It can't be that complicated."

City financial consultant Bob Swerdling of Swerdling and Associates told the council members that they will get more details shortly.

In 2007, TCI got a $7 million loan from the Department of Housing and Urban Development to finance part of the property purchase. The JFP reported in August that Brookins said TCI was behind on its HUD loan payments. Brookins could not comment this morning on whether the company is still behind on its payments, but said Jeff Wagner, the lawyer who is overseeing TCI's compliance on the HUD loan, will present more details to the council at a later date.

Brookins told the Jackson Free Press that the hotel's future revenue would pay off the loans TCI currently has on the land.

"If we float a bond to purchase the land and develop the hotel, then hopefully the hotel will pay off the debt," he said.

Also in August, JRA hired a financial consulting firm to conduct a feasibility study for the convention center hotel. JRA board members received a draft of the study last Wednesday, and the Jackson Free Press requested a copy of the study. At the time the Jackson Free Press made its request, JRA said it was not able to release the study to the public, but said it will comply with open-records laws when it receives the study.