What's Next for Voter ID? 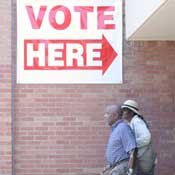 Since voters approved an initiative to require photo identification to vote, community groups are already talking about strategies to get IDs for people who need them.

With her hand pressed to the side of her face in a sign of frustrated concentration, Valencia Robinson, founder and executive director of Mississippi in Action, sat at a table in the front of the room and riffled through brochures and printouts from the American Civil Liberties Union, the Department of Public Safety and the Secretary of State's office. She was trying to sort out the requirements of the voter identification initiative that passed last week.

It won't be easy; most of the requirements of the new voter ID amendment are still up in the air, waiting for various federal and state attorneys and politicians to work out the details.

Robinson and about five other people met last week to start an effort called Operation ID to make sure people who do not currently have government-issued photo identification can vote in the next election. They have their work cut out for them.

Their goal is to educate people about how to get an ID in the Jackson area as well as in the Delta and other areas of the state. They also want to help register people to vote and tell people about the importance of voting in general.

Although the initiative provides funding for free voter IDs, it does not specify how people will be able to get them. The U.S. Department of Justice must also approve any changes to voting laws in Mississippi before they can go into effect. In some other states, voter ID laws have also faced legal challenges. Operation ID supporters say they can't afford to wait for the legal system to work things out with the 2012 presidential elections looming.

Sen. Joey Fillingane, R-Sumrall, who proposed the initiative, said whether people will need IDs to vote in the primary elections in March is up to the DOJ now.

"‘No one knows' is the honest answer to that, because it really depends on how quickly or slowly the Justice Department reviews our application," he said.

Although the initiative technically goes into effect 30 days after the secretary of state's office certifies the election results, which should be sometime next week, the state must apply for preclearance from the DOJ before it can make any changes to election procedures.

Fillingane said it's likely the state will have an answer from the DOJ before the 2012 legislative session begins in January, although two other states are ahead of Mississippi, waiting for approval on their voter ID laws. At that time, the secretary of state's office can decide whether the provisions of the amendment can be implemented by regulations through the circuit clerks' offices. Fillingane said he thinks the Legislature will likely have to pass some legislation to work out the details of the amendment, such as how to distribute free IDs.
Even when free IDs are available, people will have to be nudged to go and get them said Ruby Gray, who was at the Operation ID meeting.

No one is quite sure how the Legislature will interpret the initiative, and Robinson said she doesn't want people to get frustrated with figuring out the requirements for getting a free ID and give up.

"We want to be proactive instead of reactive," Robinson said.

People will also need to know that the initiative allows people without ID to cast an affidavit ballot, but they must bring identification to the circuit clerk's office within five days for their vote to be counted.

Operation ID is planning community events to register voters and tell them about the upcoming ID requirements and will announce its plans soon.