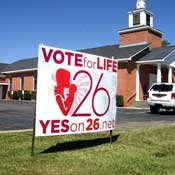 The Yes on 26 campaign's website offers downloadable fliers and suggestions for churches to get their members involved in the campaign.

The Internal Revenue Service categorizes churches as nonprofit 501(c)(3) organizations. It regulates how nonprofits can be involved in political campaigns and still maintain their tax-exempt status.

Nonprofit organizations, including churches, may not directly or indirectly campaign on behalf of or in opposition to a candidate. This includes endorsing candidates, donating to their campaigns, fundraising or encouraging people to vote for or against a particular candidate on the basis of nonpartisan criteria.

Churches and other religious organizations may encourage members to vote, distribute voter guides or conduct voter registration drives as long as these activities do not show preference for a particular candidate. They may also sponsor debates or forums as long as they provide an equal opportunity to all candidates seeking the same office and they do not indicate support for any candidate or allow political fundraising.

Religious organizations may encourage people to vote for or against ballot initiatives, however, since the IRS considers this lobbying instead of participating in a political campaign. They may also lobby for or against legislation by urging people to contact their legislators to support or oppose bills, resolutions or confirmations. Organizations may keep their nonprofit status so long as lobbying does not make up a "substantial part of its activities."

Despite the many rules and caveats about churches' involvement in politics, very few religious organizations have faced legal action because of their political actions. The IRS wrote in a 2008 letter to political parties when an organization violates its rules regarding political campaigning, it usually issues a warning, and has proposed revoking tax-exempt status in "only a few egregious cases." The conservative organization Liberty Counsel says on the Yes on 26 website that the IRS has never revoked a church's tax-exempt status for campaigning or lobbying.