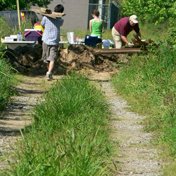 The Greater Jackson Chamber Partnership will announce funding for a "Museum to Market" trail that will run through the Belhaven neighborhood.

The Greater Jackson Chamber Partnership will announce funding for the "Museum to Market" pedestrian and bike trail project in Jackson this afternoon.

Chamber spokeswoman Jenny Woodruff said she could not give details ahead of the press conference this afternoon, but said the mayors from Jackson, Ridgeland and Flowood would attend, along with Transportation Commissioner Dick Hall.

The chamber will also host a cleanup day for the trail this Saturday, beginning at 8 a.m. Participants can bring their gloves and meet on the corner of Greymont and Moody streets in the Belhaven Heights neighborhood.

Earlier this summer, the Jackson Free Press reported that the state Department of Wildlife and Fisheries had denied funding for the project, and the Chamber Partnership has been seeking funding from other sources since that time.

Estimates have put the projected cost of the trail at about $2 million.

One of Jackson's favorite Greek restaurants has opened in a new location, just across the street from its old home.

The restaurant's sushi menu includes items inspired by local landmarks, such as the King Edward roll, the Ridgeland Roll and the Farish Street roll.

To see a menu or hours of operation, visit wasabims.com or the Wasabi Sushi & Bar Facebook page.

C Spire Wireless is now accepting pre-orders for the iPhone 4S, which will be available Nov. 11. The Ridgeland-based company changed its name from Cellular South in September and announced last month that it would offer the new iPhone.

C Spire's website has information about pre-orders and the iPhone's features.