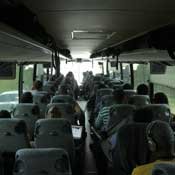 Forty college students got on the bus earlier this month and began tweeting and blogging about retracing the 1961 Freedom Rides from Washington, D.C., to New Orleans.

The PBS series "American Experience" invited students from across the country to join original Freedom Riders on the trip. The 10-day trip would be one long "intergenerational conversation about civic engagement," the producers state on the website (http://www.pbs.org/wgbh/americanexperience/freedomriders). The ride started May 6, and ended May 16 with stops in Jackson and New Orleans.

"My fellow riders joined for a short roundtable discussion, which was decided to be continuingly discussed during the ride," Bakrom Ismoilov, a student from La Grande, Ore., wrote in his blog during a stop in North Carolina. "Being a Muslim student, I was glad that this discussion started, as in my view, it is a growing issue that might have serious consequences."

John Walker from Murray, Ky., blogged about "dying" small southern towns like Petersburg, Va., an early stop on the trip.

"They aren't dying, just sleeping," Walker wrote. "And when they finally wake, just maybe America will take a long look at itself and say 'Oh, there you are. Welcome back.'"

Between May and December 1961, 436 Freedom Riders took part in more than 60 rides. Riders had the same goals: to test and challenge segregated travel facilities throughout the South and awaken the nation's conscience to the reality and injustice of segregation.

Like the first Freedom Ride in 1961, the 2011 Student Freedom Ride began in Washington, D.C. The journey kicked off a series of events in partnership with many original Freedom Riders gathering for 50th anniversary events.

"Every time I see these incredibly courageous people, I want to convey how each and every day I am appreciative for the world they sacrificed so much for," wrote Diana Mahoney from Grantham, Pa., during a stop in South Carolina.

"But somewhere deep down inside, I know that no matter how many times I say it, those words stand almost as a barrier in conveying the swell of emotion, gratefulness, and indebtedness I feel I owe to each and every one of the original Freedom Riders. It is humbling to graciously accept this gift the Freedom Riders have given us. I can't fit together words to say thank you properly."

None of the 40 students are from Mississippi.