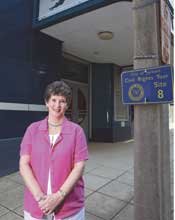 Jeanne Luckett has a contagious enthusiasm for studying and preserving Mississippi's civil-rights legacy. She put her passion and energy to use helping to plan the 50th anniversary Freedom Riders reunion in Jackson from May 22 through May 26.

Luckett, 66, was a student at Provine High School when the Freedom Riders came to Jackson in 1961, and she came of age alongside Mississippi's Civil  Rights Movement.

"The same year James Meredith integrated Ole Miss, I was a freshman at Millsaps," Luckett says.

After graduating, Luckett taught in the public-school system, worked at Mississippi Public Broadcasting (where she helped produce and film a documentary on the first Medgar Evers Homecoming) and, eventually, went on to start her own business, Luckett Communications.

Most recently, she worked with Myrlie Evers on the Medgar Evers Home and Museum, where Medgar Evers was murdered in 1964, maintained by Tougaloo College. She calls her work there "a great privilege" that "continues to be a joy and a challenge at the same time."

Luckett has worked on the Freedom Riders reunion event for 18 months, helping to locate surviving Freedom Riders, plan events commemorating their work and give them opportunities to teach what they have learned to a new generation of civil-rights activists. This has been, at times, difficult work. Mississippi arrested 329 civil-rights workers as Freedom Riders, and several more participated in the protests in other places. Many are no longer with us.

"Our numbers indicate that 100 of them are deceased," Luckett says, "and a number are infirm."

Surviving, healthy Freedom Riders, who range in age from 63 to 95, demonstrate considerable courage in returning to a Mississippi that, in many cases, treated them in a horrifying and traumatic way, she says. The arrests were often brutal experiences, and Freedom Riders' treatment at the hands of Mississippi's law enforcement system was not, on the whole, humane.

"It was humiliating. It was degrading. It was violent," Luckett says.

"Some of them were beaten when they were in prison."

The event also gives Freedom Riders the opportunity to reconnect, sometimes for the first time, and to return to a city that has changed a great deal over the past 50 years. It's likely to be an emotional week--for the Freedom Riders themselves and for those in attendance.

Tom, I have to say... I love (and am quite jealous) that you got to write about Jeanne. She's an absolutely wonderful woman!