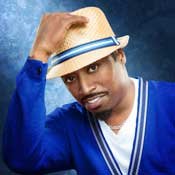 Eddie Griffin has come a long way from choreographing Chiefs games in his hometown of Kansas City, Mo., at 16. What began as a dare to tell jokes at a local comedy club has led to dozens of film roles, including turns in "Undercover Brother" and the "Deuce Bigalow" franchise.

If you've seen his stand-up, you know that Griffin, 42, didn't achieve the stature he enjoys by self-censoring. He's been honored by Comedy Central as one of the top 100 stand-up performers of all time. I caught up with him by phone recently, and he stayed true to form. Griffin will headline a stand-up comedy show Friday July 8 at Jackson State University for the BeanSprout Benefit.

Is this your first time in Mississippi?
I think it is my second time through there. I think the last time I was there was about three years ago.

In the realm of stand-up, movies, TV—whatever—who is on the money right now? Who do you find funny?
Hell, man. Sh*t, I find me funny. I find me funny as hell.

... Obama's pretty funny. I mean, you know, he did good on Donald Trump's ass last week. ... Donald ain't said sh*t since. He shut him down.

Your first foray into show business was as a dancer. Do you get a chance to use that any more?
Naw. People don't dance no more. Aw, I'm sorry. Yeah, they do. They got "Dancing With the Stars." Yeah.

I think that would make that show vastly more entertaining.
Not gonna happen.

Can you talk a little bit about your music?
Aw, man, you can go to EddieGriffin.com and check it out—on sale right there. It's like jazz meets funk meets reggae. Or as I like to call it, "funk-sual jazz."

What's next for you? What do you have in the works right now?
A couple of film projects in the works ... then, just relaxing for the rest of the year.

I belong to a local troupe of stand-up comics called the Intellectual Bulimics. I'm sure you've heard of us; we're obscenely famous.
Yes, indeed. World-renowned.

We're in the middle of a one-city tour. It's kind of a long tour; we've been at it for three or four years now. If I were to say, "Eddie, we like you. We think you have the potential to make it in this business someday. Would you like to open for one of our shows?" what would be your response?
You guys are way too big for me. I am humbled that you would even consider me.

See Eddie Griffin, Michael Blackson, Antoine Blackman and Kwame Siegel perform at the BeanSprout Benefit Comedy Show, starting at 8 p.m., Friday, July 8 (rescheduled from May 20), in the Rose McCoy Auditorium at Jackson State University. The BeanSprout Benefit was created to assist spinal-cord injury victims achieve a better quality of life. Tickets are $45 and $65, and are available at Be-Bop. Call 601-291-3647 for more information.