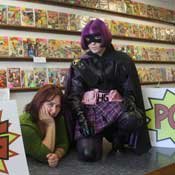 Cami Roebuck (right) and her mother, Tiny (left), have a passion for comics, and are planning the Mississippi's Southern-Fried Comic-Con June 26 and 27.

One look at Cami Roebuck's purple hair, inspired by the character Hit-Girl from the comic book and film "Kick-Ass," and it's clear that bucking trends is nothing new for the Brandon-based teen. Her look is more devotion than rebellion, as Cami possesses a polite self-assurance--a rare combination of traits for a 13-year-old.

Tiny, Cami's mother, homeschools her daughter with the help of her husband and mother-in-law. When she's not helping run Bear Creek Storage, which she co-owns with family members in Canton, Tiny, 45, supplements her income by using her Belhaven University art degree to sell sketch cards at comic-book conventions, or as they're more commonly known in the comics subculture "comic cons," or simply "cons."

Rounding out the family dynamic is Jeff, Tiny's husband and Cami's father, who is better known around the metro by his day-job alter-ego, Inky the Clown.

So how did Tiny and Cami find themselves in a world that's stereotypically the domain of pimply-faced teenage boys with subpar social skills? For Tiny, comic books were a fascination that grabbed hold and just wouldn't let go. Her first exposure to comic books came from borrowing from her brother's collection while in elementary school.

Several years ago, a family ice-skating outing went bust when the rink had no skates available in Cami's size. With an afternoon to fill, Tiny decided it was time to introduce the then-8-year-old Cami to a hobby that had brought the elder Roebuck so much joy over the years. One trip to the comic-book store, and Cami didn't stand a chance. The good art and good writing wrapped in shiny packages of superheroes and villains that had so enthralled her mother had sunk its (dare I say "adamantium"?) claws into young Cami.

"She's been an X-Men fan ever since," Tiny says of her daughter.

That fateful visit to the comic book store sparked Cami's passion for all things comics-related. It was a short leap from reading and collecting comics to actually becoming one."That led to going to comic cons and costumes, which was new for me," Tiny says. "My mother would have said not 'No,' but 'Hell, no.'"

Cami has now been decked out as Rogue and Surge (both of X-Men ), Sally Jupiter ("The Watchmen"), Dr. Horrible (Joss Whedon's, "Dr. Horrible's Sing-Along Blog"), and the aforementioned Hit-Girl. With the exception of Hit-Girl, Tiny has made all of Cami's costumes. "(Some) people are very serious about their costumes," Tiny says

Comic books have been criticized for being overly violent and misogynistic. Tiny is quick to downplay the misogyny angle.

"As far as the way (the women are) objectified visually, I don't have a problem with it, personally. I think they're more in control through script," Tiny says. "I think in the last few years, the female characters have really come into their own."

Both cite the fantastical nature of the medium when defending the female character's appearance and appeal. "They're not supposed to look (real)," Cami says.

Tiny has moved from making costumes for Cami to wear to cons to being in charge of a con herself. She serves as the co-chair of the third annual Mississippi's Southern-Fried Comic-Con, which is also a benefit for Wilson Research Foundation. The foundation funds rehabilitation research at Methodist Rehabilitation Center.

How does the man of the house feel about his wife and daughter being key figures in the Mississippi comic book community? "He's fine with it," says Cami. "He makes all my weapons."

Mississippi's Southern-Fried Comic-Con is June 26 and 27 at the Cabot Lodge Millsaps (2375 North State St.) with a special appearance by Larry Kenney, the voice of Lion-O in the '80s cartoon "Thundercats." Admission is $2. For more information, check out http://www.facebook.com/southernfriedcomiccon.