He Drank, She Drank 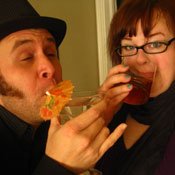 St. Paddy's Day is not exactly the best time for us girlie drinkers. It's the green beer. That's all anyone talks about. You know what the problem is with green beer, though? I'll give you a hint: it's not the "green" part.

Green beer is still beer. And I'm not a big beer drinker. I'm trying, sort of. I've found a couple of things I can appreciate. Newcastle is OK. I tried a coffee porter over the holidays that was good. But in all honesty, I'd rather just drink my Amaretto sour or a daiquiri. If it comes in a bottle, I want it to be a Bacardi or a Smirnoff Ice. If the alcohol content is in the single digits (and not beer), it's probably a winner in my book.

So what about after I've had my one sip of green beer? Then what? What can I possibly do to properly celebrate St. Paddy's Day while everyone around me at the bar is swilling emerald sin?

I'm glad you asked. I've made a "Top 3" list. That's right; I said "Top 3." This is my columnčor half a column, but let's not split hairsčand I can do whatever I want. That, and I'm working with a word limit here.

3. Count the number of green beers my friends consume. Uh, scratch this one. I haven't been in school for a long time, and even when I was, I didn't have the advanced mathematical course work necessary to undertake such complex calculations.

2. Organize the beads I caught at the Mal's St. Paddy's Parade by color, shape, size and shininess. This one may require some therapy, because I may inadvertently remember what I had to do to earn those beads.

1. Practice the acronym "OOPS."
O = Ogle (Check out the ladies.)
O = Offend (Say something stupid. Don't worry about this one, guys; it'll come naturally.)
P = Pinch (You're already in hot water, so you may as well earn the╔)
S = Slap And yet another successful St. Paddy's Day.

Whatever, dude. St. Patrick's Day is all about beer. Well, maybe it's about more than that, but whisky is a whole other article. Green or not, beer is at the heart of celebrating St. Paddy's Day, and especially when you're talking about thousands of people cramming themselves into downtown Jackson for the annual parade. The fumes alone are enough to intoxicate anyone within a five-mile radius of downtown.

I should make clear that while I play the role of beer snob, uh, elitist, I am not. I'm really excited to find out how deeply green my beloved PBR gets when specially prepared for the Big Day. For those of you new to the beer game, Pabst Blue Ribbon is at the low end of the beer spectrum, and by low, I mean really cheap. How-ever, nothing tastes like spring and summer like PBR does. However, we're only still creeping toward spring, and for now, Guinness still has my taste buds in its clutches and will have its own place in my beer consumption on parade day.

There is a reason why Guinness is the best-selling alcoholic beverage of all time in Ireland. It is delicious beyond comprehension and essential to the enjoyment of beer. Guinness is an Irish dry stout, making it perfect for this glorious celebration, and it gets its distinctive color and taste from roasted barley. I often feel like I am eating a thick, slightly burned piece of toast when drinking Guinness. Y'all, burned tastes good in this case. The world consumes 1.8 billion pints of Guinness every year, and I suppose at least 1 billion of those are served up on or around March 17 each year.

People love their pints of this black stout. Granted, it's so dark that it won't turn green, but who needs green beer? To this day, many people I encounter in bars are astonished at seeing a lady knock back pints of beer at all, but especially Guinness. It tastes perfect to my taste buds, but I can see that some people might be put off by the slight bitterness and hoppy flavor. For me, Guinness speaks to my personal heritage and might even be convincing enough to make you feel a little bit Irish (or a lot, depending on your consumption level) this St. Paddy's.

Look, even if you stick with the green beer that tastes like water to those of us with seasoned palates, you'll be in the spirit of the season. Go to the parade and imbibe, follow up with a trip to the pub where you'll likely get to cringe at Brent's hilarious attempts at ogling. Cheers! (Or slaps.)