A Man's Summer in the City 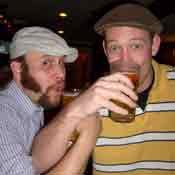 Having spent my day on Interstate 220 in a black car with no air-conditioning, I was having trouble finding anything to appreciate about summers in Jackson. But I knew a silver lining had to be out there, so I gave my pal Brent a call to hear his thoughts on the subject.

Our evening began at Wendy's, but after we caught ourselves singing along softly to Owl City's "Fireflies," we quickly decided to head to a pub for some liquid testosterone. The bartender made us finish our Frosties outside, but once we got in and the drinks started flowing, I presented my question:

Bret: So besides lying listlessly under a ceiling fan, what's a guy to do in Jackson during the summer?
Brent: Well, I know what I don't want to do—be emasculated by the media.
Bret: Come again?
Brent: If I have to hear one more radio spot talking about "getting your bikini line ready for summer" or read one more article about fruity men drinking fruity drinks ...
Bret: Didn't you write most of those articles?
Brent: Shut up. Your wife makes you iron for her.
Brent: Sorry. What were we talking about?
Bret: Your impending emasculation.
Brent: Oh, right. I'm sick to death of having frou frou girlie stuff shoved down my throat. That's why I'm officially declaring this summer the "Summer of the Man." I'm going to promote, attend and wax poetic on all things manly.
Bret: And what qualifies as "manly"?
Brent: Bret, there's a very simple litmus test for manly activities. All you have to do is ask yourself one question: "Does this cause pain?" If your answer is "yes," then it's manly. If your answer is "no," then it's probably best to get somebody to change your pants and tuck you in.
Bret: I, for one, am partial to the pain of a distended belly, which I plan to experience at the Top of the Hops Beer Festival July 31. Over 150 beers, a souvenir tasting glass and unlimited samples, all for the price of admission. I bought three tickets!
Brent: Wow, how can you afford it?
Bret: Eh, I'm borrowing off the equity that's building on my student loan.
Brent: You can do that?
Bret: Apparently.
Brent: That sounds delightfully irresponsible, but I'm thinking in more traditional terms. You know, blood, carnage and the like. I'm talking about fights, baby!
Bret: I didn't think Jackson did fights—legitimately, anyway.
Brent: Sure we do. Psychout Promotions is holding MMA events at the Mississippi Coliseum downtown Aug. 28, and the Wahabi Shrine Temple in Byram Sept. 11.
Bret: Sweet!
Brent: And if you like your fighting a bit more, um, theatrical, School of Hard Knocks holds events the first and third Saturdays of each month. We're talking good-ole-fashioned rasslin', baby! Eight bucks to get in. The next event is in Pucket, and the first bell rings at 8 p.m., with more details on Facebook.
Bret: Good call! I also hear roller derby is back in action this summer. Do you even call those "games"? Maybe it's a bout.
Brent: How about a dip in the Rez?
Bret: And wind up on the business end of a gator's death roll? Pass.
Brent: Oh, come on—nobody ever gets attacked.
Bret: Hey, I'm from Pennsylvania. I only have to hear that there might be a gator somewhere in Mississippi, and I swear off all non-chlorinated water sources.
Brent: Wuss.
Bret: Girlie drinker.
Brent: Yankee.
Bret: Redneck.
Brent: Let's settle this in the ring ...
Bret: Yeah!
Brent: With a chess board!
Bret: Deal! Wait ... What?
Brent: Chess boxing, man! Don't you keep up with your Dutch hybrid sports? Competitors alternate between rounds of boxing and chess, three minutes each, and win by either a K.O. or a checkmate.
Bret: Is that even played in Jackson?
Brent: Not yet, but it could be! In fact, if we can get 1,000 people to like the idea on our Facebook chess boxing page, you and I will fight the inaugural match.
Bret: You mean the Facebook page you can find by doing a search for "White Rooks and Right Hooks"?
Brent: Excellently placed plug, sir.
Bret: And if we get less than 1,000?
Brent: Then it'll be totally dependent on our health insurance premiums and/or BMIs.
Bret: BMIs, eh? Guess we better start getting in shape if we're gonna do this thing.
Brent: Right.
Bret: Bartender, a tall glass of your most caloric beer, please, and a wedding-cake martini for my masculine friend here.
Brent: And pass the chips.

You guys are awesome! Can't wait until the 1st match!