Steer Clear of the Clover 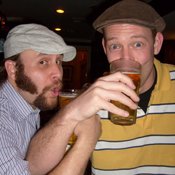 With St. Patrick's Day upon us, I found myself asking the same question I ask every year: At what point did St. Paddy's become a green Mardi Gras? By the time you add throwing beads, extensive alcohol consumption and a national excuse for pinching women, you have two identical holidays separable only by their color schemes. To help answer this question, I invited my friend Brent Hearn out for drinks and general ponderings.

Bret: Okay, so over the past several decades we've gone from a deeply religious holiday to beads and green beer. At what point did Patrick join a frat?

Brent: And Patrick was…?

Bret: Sigh. You didn't even click on those Wikipedia links I sent, did you?

Bret: Sad. I thought you had a little Irish in you?

Brent: I did once. But it was in college, and it was a confusing time for me.

Bret: Never mind. I'm sorry I asked. OK, originally, SPD was a celebration of one of Ireland's most well-known patron saints. Patrick is credited with spreading Christianity among the pagan Irish natives, and the churches of Ireland memorialize him each year with a Day of Obligation.

Brent: Are they obliged to drink?

Bret: They're obliged to go to church. In fact, pubs weren't even allowed to be open on SPD until the 1970s.

Brent: Are you kidding me? I thought this was a party holiday. Lies! It's all been lies!

Brent: Granddad had a groat once. Smelled like cheese.

Bret: What? No! Groat means pay. Servants demanded their pay to spend on ale—you know what? Forget I brought that up.

Brent: What about the snake thing?

Bret: You mean the legend that St. Patrick supposedly rid Ireland of all its poisonous snakes, despite evidence that they never lived there to begin …

Brent: Exactly! We need to figure out a way to celebrate that! Ooh, ooh, I know. We can somehow lure snakes to the center of town where, in a frenzied celebration of mob mentality, the townspeople beat them to death. Wouldn't that be cool?

Bret: I'm pretty sure that was an episode of "The Simpsons," Brent.

Brent: Darn it. I hate "The Simpsons."

Brent: OK, so what about leprechauns? That's a staple of Irish tradition. Where did they come from?

Bret: I'm not sure where they came from, but I know where they wound up.

Brent: A tree in Alabama.

Bret: Yup. Leprechaun lore bugs me, though. Everyone thinks of them as cute little green men that hide cereal, but the real leprechauns were vindictive, scary little imps. Tick one off, and you're cursed for life. In fact, many Irish used to leave milk or food on their back stoops at night in case a hungry leprechaun was to wander past. Essentially, they're kinda like a weird amalgam of dwarf gypsies and a green Santa Claus.

Brent: Ever try the milk thing?

Bret: Yeah, all I got were cats—lots and lots of cats. You?

Brent: Yep, but after a week of putting milk out on the doorstep, followed by the longest bad luck streak of my life, it occurred to me that my leprechaun may be lactose-intolerant. Freaky little elf cobblers …

Bret: You know, that's probably what SPD is missing these days: a healthy dose of fear.

Bret: Yeah, every good holiday is built around the fear of something. Halloween: fear of the dead; Independence Day: fear of the British; Mardi Gras: fear of … Lent. And let me tell you, after reading up on Irish superstitions, fear was one thing they were not short on. Legend says that even their good luck charm, the four-leaf clover, could only be found growing on ground that covered human remains.

Brent: Hold up. If you can only find four-leaf clovers where human remains are found, you're taking them from someone's grave. So in Ireland, grave robbery equates to good luck? Or another possibility—maybe they're commonly found at the same place as human remains because they caused the person to die. The Irish potato famine was a lie! It was clover that killed all those people! It was CLOO-VERRRR! I can picture it now: Sean O'Malley: We're a wee bit short of potatoes right now, laddie. Why don't you have yourself a couple of those four-leaf clovers there? They'll make good roughage. Son of Sean O'Malley: You mean the ones growing right here where Uncle Seamus died? I don't know … are you sure they're safe, Da? Sean O'Malley: Why, of course I'm sure! Here, I'll show ya. (Eats clover) They're magically delic— Boom! Dead.

Bret: You're an idiot.

Brent: An idiot that may or may not be picking up the tab tonight.

Bret: cough. And what say we toast to your generosity with a traditional Irish blessing that I made up just now?

May your homes always be warm / May your fields always be grassy, / May the milk you leave for leprechauns / Not make the poor boys gassy.