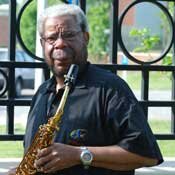 Many musicians here live an almost "Hannah Montana" lifestyle—going to school daily as a teacher, yet rocking the masses at night. I've been teaching 11 years in the Jackson metro area, and even my one-man band Clinton started out as a teacher.

Jazz saxophonist Russell Thomas Jr. is a professor of music, director of jazz studies and coordinator of music theory at Jackson State University. Thomas has played with such acts such as Dizzy Gillespie, The Little Milton Band, and the Montreaux Jazz Festival, as well as all over the U.S. and the world.

Check out these awesome educators when they play at a venue near you. Check the listings here in the JFP so that you can make plans to hear these talented teachers!

On Friday, kick off the weekend with Cary Hudson with Grayson Capps and the Lost Cause Minstrels at Fire. The doors open at 8, so get there early for a good seat because this show is going to be a fab one. Get a great steak and hear some blues at Kathryn's when the Lucky Hand Blues Band plays at 7 p.m. Rockers Train pay a visit to the Jackson Convention Center. Call for ticket prices and start time for the show. Also check out Underground 119's Sunset Series with Raphael Semmes. Each week he has a different "machine" playing with him from 5-8 p.m. This week he has "Rock Machine" Hunter Gibson, so come out for some great music from two awesome performers. It's Back to Basics Friday at Suite 106 and Dreamz Jxn has SPRUNG.

Saturday night Reed Pierce's has Fade 2 Blue, Otis Lotus is playing at Pelican Cove, Brady's has karaoke, Cultural Expressions has Gospoetry and Suite 106 has Back to Basics: Away Team Edition. Sunday, Semmes starts a jazz brunch gig at the new restaurant Table 100 in Flowood.

Have a good one, and support teachers who rock!

Visit the music calendar at http://www.jacksonfreepress.com/index.php/music/listings/.