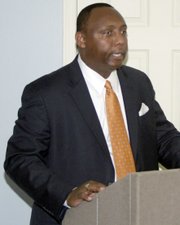 Corrections commissioner Chris Epps has overseen reforms that brought Parchman out from under court supervision.

It's a strange month when the Parchman Farm comes out looking better than a county jail. On March 10, a federal judge finally dismissed the bulk of Gates v. Collier. A 1972 decision on this longstanding court case mandated a slew of reforms at the Mississippi State Penitentiary at Parchman, then the only state prison in Mississippi. Federal Magistrate Judge Jerry Davis dismissed all portions of the case dealing with state institutions but not the portions regarding Mississippi counties' correctional systems.

Less than two weeks later, Hinds County Sheriff Malcolm McMillin fired eight corrections officers from their posts at the county's detention center in Raymond for allegedly using excessive force on a group of inmates. McMillin has asked the FBI to look into the March 6 incident. Surveillance footage captured officers, whose names have not been released, using what McMillin termed "inappropriate" force on a group of inmates in a holding cell.

Days after McMillin confirmed the officers' firings, he suspended a ninth corrections officer without pay for allegedly beating another inmate, Charles Johnson, in a separate incident.

In 1971, when Parchman inmate Nazareth Gates filed his lawsuit against John Collier, then superintendent of the prison, conditions at Parchman were still as cruel and starkly unequal as they were when immortalized in blues songs from the early 20th century. Prisoners lived in separate, racially segregated camps on the sprawling Delta property farming cotton and other crops.

They were watched not only by prison guards but also by gun-wielding prisoners called trusties. The "trusty" system--distinct from the current system of inmate workers also called "trusties"--was in part a result of understaffing at Parchman.

The number of civilian guards at the camps was not enough to maintain order, Judge William Keady wrote in his Oct. 20, 1972, decision in the Gates case. In the place of "free world personnel," prison staff picked inmate trusties and a variety of other inmate positions--including "cage bosses," "floorwalkers" and "hallboys"--to perform administrative duties and supervise their fellow inmates during non-work hours.

Without evaluating the inmates for violent tendencies or mental instability, the prison staff allowed these trusties to physically punish, and in some cases shoot at, other inmates.

Keady also found that inmate housing at Parchman was "unfit for human habitation under any modern concept of decency."

"The facilities at all camps for the disposal of human and other waste are shockingly inadequate and present an immediate health hazard," Keady wrote.

"Open sewage is a breeding ground for rats and other vermin."

Because of a shortage of medical staff, inmates sometimes performed medical procedures despite not having medical training. Not surprisingly, perhaps, historian David Oshinsky titled his 1997 book on the prison, "Worse Than Slavery."

In 1971, the U.S. Department of Justice joined Gates' class-action lawsuit on the side of the inmates, the first time the federal government had done so.

Reform at Parchman came slowly but then picked up, especially with the construction of additional state prison facilities and the corresponding increase in state funding for corrections.

In his order finally dismissing the case, Davis commended current Corrections Commissioner Chris Epps for implementing many of the reforms necessary to comply with Keady's ruling. Under Epps, who became commissioner in 2002, the state's prison system earned accreditation from the American Correctional Association, making Mississippi only the 14th state to earn the recognition. Attorney Ron Welch, who has represented the Gates' class plaintiffs since 1978, also praised Epps' involvement.

The next frontier in improving the state's treatment of inmates is in the counties, where Gates still applies. Part of the problem in reforming county jails is that there is little continuity or institutional knowledge among jail staff.

With every county sheriff's election, the arrival of a new boss at the county jail can erase any progress made in the procedures for handling inmates.

"When there's a turnover in the sheriff, everything turns over," Welch said.

IS Parchman REALLY "fixed" or did they just shift the problems elsewhere, Look at Walnut Grove (federal lawsuits etc) and from what i can tell, THERE are some ISSUES at WCCF along with all our "correctional" facilities. ESPECIALLY the private prisons, they seem to think they answer to NO ONE,, employees especially. A good many of them have one foot on the edge of being inmates themselves in my opinion! TAKE NOTE people, some of these guys will walk the streets again and many have grown up in a very violent atmosphere escalated in prison. SOME are much more dangerous when they come out. PROGRAMS that we the tax payer pay for are not what they claim to be for the most part. just my opinon, but some of it has been learned first hand during visits/tours.

Even after the agreement was reached surrounding Unit 32, there were still accusations of verbal abuse by corrections officers at Parchman. The allegations surrounding Walnut Grove if proven to be true shows there is still much work to do. Drugs, homosexual relationships between guards and minor children, and a lot of assaults? The exposure is not good for the state. I think there is still much to be uncovered.