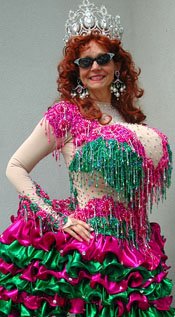 The Sweet Potato Queens will promenade in new outfits next week.

The Sweet Potato Queens will stuff themselves into new costumes for the Zippity Doo Dah Parade next week.

"No inference regarding the magnificence of the other queens' outfits should be drawn from this image of mine," Browne wrote in an email. "Suffice it to say, they will be thrilled with their new outfits--until they see mine."

Browne also has a new hat Tom Courtney of New York made especially for her.

"It is so huge, I think I'm gonna nail it to the wall at Sal & Mookie's and sit under it like a hair dryer," she wrote. "It weighs a ton! But I will wear it all over Fondren next Friday if I have to wear a cervical collar to hold my head up!"

While all the queens are getting new outfits, only Browne got the new hat--"privilege of rank and all."