The History of the Mal's St. Paddy's Parade 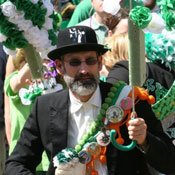 In the early '80s, Malcolm White had been throwing yearly St. Patrick's Day parties at the bar and restaurant he managed, George Street Grocery, the present location of the Ole Tavern on George Street. The parties were great, but he had bigger things in mind.

After the city gave him a permit to block downtown traffic during a weeknight rush hour, he called his friends and said, "We're gonna have a parade." He and a couple hundred friends had a blast marching through downtown Jackson dressed to look like they were characters in Tennessee Williams plays. The parade ended at George Street, where a crowd had gathered for an after-party.

When city officials realized what they had permitted, they asked White to move subsequent parades to the weekend, and the parades have been on the third Saturday in March ever since.

White added different components to the celebration each year, making it more and more extravagant, attracting more and more people. By now, the parade brings approximately 60,000 people to Jackson each year, pouring more than $7 million into the local economy. And it isn't just a day of green-tinted debauchery, either. Last year, the Parade raised about $40,000 for the Blair E. Batson Children's Hospital.

The route has been changed quite a bit over the years. For a time, it started and ended at the State Fairgrounds, until coming to its current resting place at the downtown bar White co-owns with his brother: Hal & Mal's on Commerce Street.

While the Parade is held near St. Patrick's Day, it's taken on a life of its own. "It's become more of a rites of spring thing that any sort of St. Patrick's celebration," White says. "It's more about Jackson and the coming
of spring."

Around the third or fourth parade, White began providing themes—the first one was "Irish I was in the Land of Cotton"—and the themes change every year. For the 29th parade this year, the theme is "Hey, Hey, The Blues is Alright," and the Grand Marshal is a group: White says he's confirmed about five of the 18 folks who serve on the Mississippi Blues Commission.

For White, part of what makes the parade so great is its unpredictability.

"It's not as if we come up with the theme, and then I assign each group a role in the play. It's very freestyle and free flowing. You just never know," he says. "I show up every year amazed at what people have come up with."