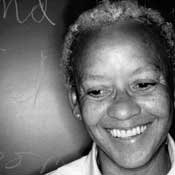 It's fitting that Nikki Giovanni's appearance at Jackson State University next week is in honor of the JSU Student Government Association's "Women's Emphasis Week," celebrating women's achievements. For more than 40 years, Giovanni has a leading voice for women's and minority rights, as well as a successful and influential poet.

Born in 1943, Giovanni grew up in Knoxville, Tenn., and in the suburbs of Cincinnati, Ohio. Her family--especially her close relationships with her parents and grandparents--figures heavily in her work. Of her childhood, she noted in her widely anthologized 1968 poem "Nikki-Rosa" that "all the while I was quite happy."

Giovanni attended Fisk University in Nashville, where she was swept up in a renaissance of black artistic expression. In 1967, she graduated with a degree in history. She published her first book of poems, "Black Feeling, Black Talk," in 1968. Later that year, she published a second book of poetry, "Black Judgment." The two books, with their strong, even militant sense of African American identity, garnered Giovanni a wide early audience.

Gradually, the ardent political focus of Giovanni's early work gave way to a softer, more personal style, especially after the birth of her son, Thomas, in 1969. She has published more than 15 books of poetry, numerous books for children and an autobiography, "Gemini," that was a finalist for the National Book Award.

Since 1987, Giovanni has served as a distinguished professor of English at Virginia Tech.

Giovanni speaks at Jackson State University on March 23 at 7 p.m. Her speech in Rose Embly McCoy Auditorium at 1400 Lynch St., is free and open to the public.