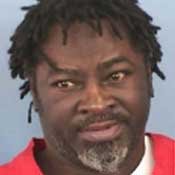 Robert Simon Jr., 47, gets to live a little bit longer on death row. The state of Mississippi planned to kill him May 24, but the 5th U.S. Circuit Court of Appeals stopped the execution just hours before the scheduled time.

The state lawyers arguing for Simon's execution and the lawyers defending him meet again June 6 in appeals court.

Simon's defense says that he hit his head in January and that Mississippi Department of Corrections didn't allow Simon's own doctors to look at him, although state doctors did examine him. For that reason, the federal panel ordered the stay of execution. Simon's lawyer had requested that the court thoroughly review his mental-health claims, including that the knock on the head in January left him less aware of his circumstances.

The Associated Press reported last week that Attorney General Jim Hood predicted more "knot heads" would appear on death-row who would slip and fall at Parchman to avoid execution.

The state sentenced Simon to death for the murders of Carl Parker, Parker's wife, Bobbie Joe, and their son Gregory. He was tried separately for the murder of their daughter Charlotte and was sentenced to life. The four were found dead in their burned home on Feb. 2, 1990, in rural Quitman County.

Mississippi uses a three-drug cocktail to execute condemned prisoners. Pentobarbital, a barbiturate anesthetic, replaced another drug, sodium thiopental, which had been the standard anesthetic used in lethal injections across the country. In January, however, Hospira Inc., the only American supplier of sodium thiopental, announced that it would stop manufacturing the drug.

The Wall Street Journal reported in January that Hospira faced opposition from the Italian government when the pharmaceutical company planned to produce the drug in Italy. Hospira also faced pressure from activists to stop making the drug.

Advocacy organizations challenged the switch to a new drug. Mississippians Educating for Smart Justice, an anti-death-penalty group, and Mississippi Cure, a criminal-justice reform organization, filed a lawsuit against MDOC April 14 arguing that the state failed to follow its own legal requirements for providing public notice when changing the combination of lethal-injection drugs. Along with the two organizations, three death-row inmates with impending execution dates also signed onto the lawsuit: Benny Joe Stevens, executed May 10; Rodney Gray, executed May 17; and Robert Simon, who would have died May 24.

Mississippi Department of Corrections officials said in an official statement that they await the court's opinion in Simon's case and stand ready to carry out the orders of the court.

Mississippi has 58 prisoners on death row. Two of those inmates are women. Of the 58 condemned, 33 are black, 24 are white and one is Asian, MDOC reports.