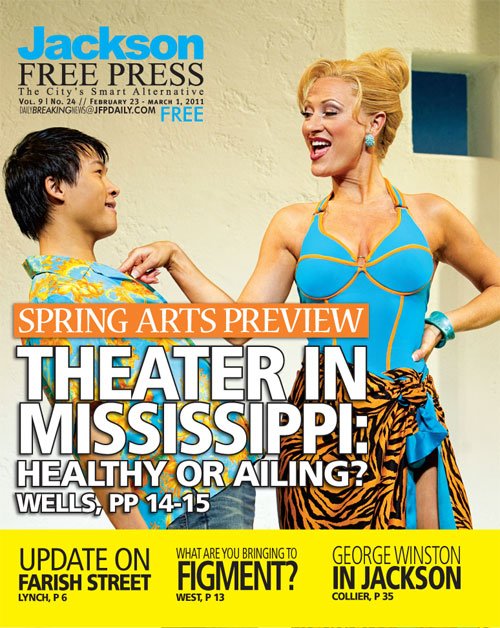 Katrina Byrd makes it a point to get to the JATRAN bus stop early. The bus is supposed to come by at 3:30 p.m, so she gets there at 3:15 p.m. When the bus shows up late, at 3:40 p.m, it whizzes right by her without slowing down.

That's life in Jackson for Byrd, a 38-year-old writer who is active in the metro-area theater community. She was born with congenital cataracts. Growing up in Jackson, kids teased her mercilessly for having a left eye that looked in one direction and a right eye that pointed elsewhere.

She's not letting life pass her by, though. She'll find a way to work this all into a play.

As playwright-in-residence for the Center Players Community Theatre in Ridgeland, Byrd, 38, wrote the play "Justice is Blind," a story of a blind black woman who works as a police detective. The Players presented a staged reading of the work in November.

Byrd does more than write, though. She also acts, leads workshops and networks with other writers. When people ask what she does, she just says, "I'm a writer." Sometimes people assume that means she sits around the house all day sipping green tea.

"I can't worry about other people. I have to focus on what I'm doing as opposed to what people think," she says.

Coming from a blue-collar family, she struggles with the conflicting notions of traditional hard work and her artistic calling. She went to a party in February, and right as she was dipping into the guacamole, a Jackson State University professor asked if she would come speak to her class.

"It's weird when I go to a party and it turns out to be work," she says.

If You Build It ...
Theater in Jackson is thriving. New Stage Theater pays its actors and directors, making it a professional theater. But nonprofit New Stage isn't the only theater in town. A number of community groups and entrepreneurial efforts keep emerging.

The Black Rose Theater in Brandon, for example, will stage six musicals this year, including "Oklahoma" and "Bye Bye Birdie." Amateur actors of all ages come together for these community shows.

Theater lovers write, produce, direct and act, then go watch the plays others are putting on. A growing network of all those involved in theater has led to more collaborations. Young professionals educated in Jackson choose to stay home to create fresh experiences.

One thing many Jackson theater groups say they need is bigger venues. Thalia Mara Hall, with its 2,400 seats, just isn't big enough, says Averyell Kessler of Jackson-based W. Kessler Ltd. For the last 29 years, Kessler has scheduled five or six Broadway touring productions at Thalia Mara each season. The two February shows of "Mamma Mia!" sold out. Those audiences wanted something they couldn't get from the movie DVD.

"There's a completely different experience with someone in front of you singing ABBA," Kessler says. She'd like to see a larger venue for the national touring shows and maybe expand the number of shows she can bring to town.

JLee Productions also wants more venues in Jackson. Jimmie Lee, owner of the company, rents out the Jackson State University auditorium for his plays and shows. It's the largest space he can rent; he says he can't afford the steep prices of renting out Thalia Mara Hall.

"They have a front-of-the-house fee and a back-of-the-house fee," he says. These fees cover renting the stage and seating area and its backstage, respectively. Renters must also pay insurance and for securing while occupying the space.

Lee, 28, teaches social studies at Whitten Middle School. On his own time, he writes plays and screenplays, then he figures out how to get audiences to see his shows. He's written and produced three plays: "No Good Comes to Those Who Do Wrong," "Why Am I Single?" and "What Do the Lonely Do for Christmas?"

"When I write them, I want you to feel like it's something that can really happen," he says. Sometimes that means the language can be a little risqué, just like it is in real life.

A 2005 JSU graduate, Lee dreams of owning a small theater in downtown Jackson some day. For now, he is trying something new. He will screen his film documentary, "Blacklove," at the Alamo Theater on Farish Street Feb. 26.

Lee hasn't had a chance to collaborate with the other theater groups in the area. The actors in his productions are usually black, while most of the actors involved with other groups are white. He thinks this is because of the target audiences.

"We need to network a little more," he says.

Diversify, Diversify, Diversify
Earlier on the same day Lee screens his documentary, Byrd will lead a workshop for writers. "Dramatist to Dramatist" starts at 12:30 p.m. Feb. 26 at St. Colomb's Episcopal Church. It's another networking opportunity for Byrd, a Millsaps College graduate.

Over the past six years, Byrd has seen new theater talent and energy blossom in Jackson. During that time, she wrote several plays. One of the first, "Until Death do We Part," was a submission to the Fondren Theatre Workshop. When FTW chose her play to produce, she was shocked.

"I had no idea this was going on," she says.

She credits playwright Beth Kander, a FTW founder, with encouraging her and helping her improve. That support made such a difference that Byrd, in kind, supports other artists in the community.

Theater is part of her identity—something she realized a couple of years ago. She read a part in FTW's production of "The Vagina Monologues" in the Rainbow Co-op Court in 2009 (sponsored by the Jackson Free Press). The show was a benefit to raise money for the Mississippi Coalition Against Domestic Violence and The Women's Fund. The 20 or so women participating had only met a couple of times to go through the readings. Each woman chose the splash of pink or red she wanted to wear to match her reading. Byrd, reading about a happy vagina, wore a flowing blouse with large, loud pink and red flowers. She read her part and sat down in the sold-out crowd in the dim, intimate space.

"It was like a roller-coaster ride, sitting next to people you don't know," she says.

Laughing faces in the crowd rose and then fell during horrifying tales of rape and abuse. Byrd noticed the other women reading that night and how different they all were. Nicole Marquez, a dancer recovering from a traumatic fall that might have left her paralyzed, moved the audience with her determination. Byrd looked at the other women: big women, skinny women, younger women and older women. It all got to her; she cried during her roller-coaster ride.

"The number of women—diverse women—it was just so amazing to me," Byrd says. "Primarily, theater groups are white. To see a number of black faces and white faces, it was amazing."

What really moved her about the evening was that, at last, she saw how she fit in Jackson's bigger theater picture.

"I'm not a rich person. I often feel like I don't have anything to give. I'm not able to write a $100,000 check to my favorite charity," she says. What hit her that night was that she could help others by giving her time and talent. She knew that night she was helping battered women.

Looking Straight Ahead
A cultural reformation has hit live-performance arts, says Ben Cameron, arts program director at the Doris Duke Charitable Foundation in New York. As more people go digital to get their news, read their literature and entertain themselves, Cameron says live theaters face dwindling audiences who don't see the value in shelling out huge bucks for a show that will only last a couple of hours and can't be revisited.

The good news, though, is that while large, expensive venues for large audiences are part of an antiquated model, more and more people are participating in theater. Cameron calls it consumerism vs. participation. He also points to socially minded, actors and small theater groups who work for causes and not necessarily profit.

He also reminds communities that for every dollar spent on live theater productions, another $5 goes into the local economy.

Byrd thinks theater in Jackson will expand as much as Kessler and Lee want it to and in the different directions they see for the future. The audiences will grow, the participants will increase, and the venues will come.

"I'd like more bringing people together," Byrd says. "The arts as a whole bring our city together." That includes more blacks and whites collaborating on theatrical projects.

"We have a group of people who say, ‘We don't do this.' I was welcomed and invited," she says.

After a Center Players rehearsal of the musical "Hats," another cast member complimented Byrd on her singing and acting. "I bet you used to do this all the time in high school," the cast mate told a bewildered Byrd.

"No," Byrd explained. "I wasn't picked for the plays. Theater seemed unattainable to me."

She plans to keep writing, acting and networking. She has a vision of getting all the various theater groups in Jackson to have a meeting of the minds.

"I'd like to see more collaboration. We should do some shows and put all our names on it," she says.

Last year, Byrd had eye surgery to correct her wandering eye. "I've been almost in the corner, trying to relearn life," she says. "My mind is still trying to learn what is going on now both eyes are facing forward."

Spring is around the bend, leaving no excuse of staying inside. Why not celebrate the arrival of spring by checking out JFP Events Page and make plans to have fun? Your inner child will thank you.

Thanks so much, JFP, for making "Theater in Mississippi" your cover story. Theatre artists usually work long hours for very little pay, if any. Most of the time they only want an audience. Your considerable spotlight has the power to let them entertain and enlighten their friends, family and neighbors. I wish, however, that you had give the ultimate honor (a cover picture) to a local producer, rather than a road company of a very old show. Of course, we're all glad to have Kessler present shows; but those shows rarely feature Mississippi actors, directors, designers or technicians. The JFP has done a wonderful job in the past of celebrating local artists. I especially appreciate the fact that Fondren Theatre Workshop has previously benefited from a JFP cover story. But aren't there other theatre artists in Mississippi who deserve the same attention? Thank you for your consideration!

You're right, thespis. I actually approved the cover photo, thinking it was from a local production. I should have made sure that that editor obtained a photo of local artists for the cover rather than assuming. It is my fault for letting that get by, and I apologize.