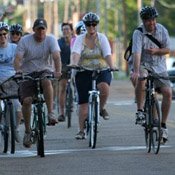 Tonight's Jackson Bike Advocates ride leader is Anna Allred, 24. She is originally from Meridian, Miss. She graduated from Meridian High School in 2005. She has lived in Jackson just over six years.

Allred joined the monthly bike rides in September 2010 and has participated every month since. "I wanted to help more," she said, so she volunteered to lead December's ride.

Allred said the group of about 15-20 people ride every month. She plans on staying involved with the Jackson Bike Advocates as long as she is a student at University of Mississippi Medical Center.

Jackson Bike Advocates ride again in the Bright Lights JBA Community Ride tonight at 6 p.m. The 6-mile ride begins in the parking lot at Rainbow Natural Grocery Co-Op. Bikers quench their thirst at the King Edward hotel, and scurry through Fondren, finalizing their excursion with a holiday party at Petra Cafe. Follow the Jackson Bike Advocates on Facebook. If you want to join, email the group at [e-mail missing].

Bicycling is common in big cities where many forms of transportation exist, helping to offset harmful vehicle emissions. Jackson Bike Advocates' goal is "being dedicated to creating a greater bike presence in the capitol city," Melody Moody, director of JBA, said.