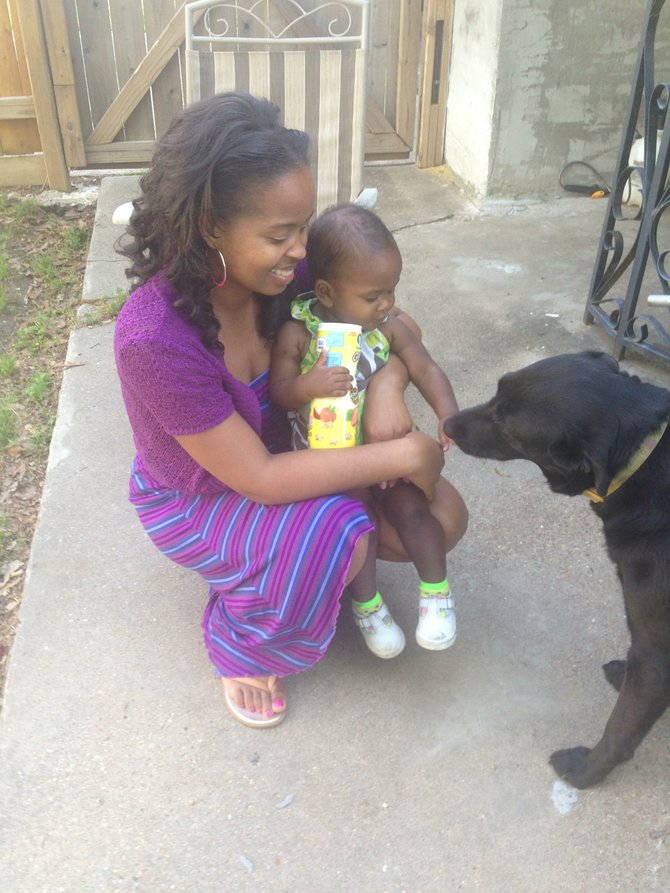 When Peyton began crawling and walking, she became more inquisitive and learned to mimic everything she saw—quite well.

After having her, I saw that being a little older in age required a lot more patience than I had. When Peyton began crawling and walking, she became more inquisitive and learned to mimic everything she saw--quite well. If I have a pile of trash to sweep up, I have to be quick on my feet or be ready to receive assistance from Peyton. Once the fridge swings open, the countdown from five seconds begins, and if you don't close it before Peyton sprints her way over, salad dressings and all sorts of things go a-flying.

She is into everything--closing all of the doors around the house, changing the channel on the television and even rearranging furniture. I figured that if I would just be a little more patient and show her how to do things, then I would not spend as much time telling her to move back before she gets hurt.

The funniest thing happened a few weeks ago while I was getting ready to pick greens for dinner for the next day. I knew that as soon as I started, Peyton would come running and get in my way. I usually do the cleaning, washing and primping when she is asleep, but this day it was impossible to wait for her bedtime because I had a list of other things to accomplish before my own bedtime. As soon as I sat down and spread the greens over the floor, Peyton was en route to destroy and conquer. Before she could even get her hands on it, I asked, "Skylre, do you want to help mommy pick greens?"

I showed her how to do it, and she went at it like a pro. My oldest daughter, Jasmine, saw that the baby was helping and decided to come show and help her do it right, but Peyton had her own thing going. Daniel was not around at the time, so I videotaped it.

On a different occasion, I decided to go the Dollar General just around the corner from the house. Instead of putting Peyton in the buggy, I placed her feet on the floor so she could walk. As I pulled the buggy out, she walked around behind it and started pushing it (just like she has seen me and others do it). I tried grabbing her hand but was not prepared for that fight, so I allowed her to lead the way--right down the aisle that led to the Easter candy.

Just as she made it to the shelf strategically placed for children, she slowed the buggy down, walked over and carefully made a candy selection. Once she had the candy in hand, she walked over to me as if to ask could she have it. I really would have bought it, but was afraid that she could not eat jelly beans without choking, so I politely took the candy and placed it back on the shelf.

As Mother's Day approaches, it makes me wonder what my mother enjoyed most about watching me and my siblings when we were infants, toddlers and so on. I can't imagine doing some of the things that Peyton does when I was her age, but I am sure whatever I did, my mother can look back, smile and appreciate motherhood just as I do.

Now that I am well into my 30s, and a mother of two, I have learned to appreciate the simple things in life, like laughing at Peyton with Daniel and Jasmine. As long as there's a baby named Peyton around, there's sure to be big family memories in the Curley household.