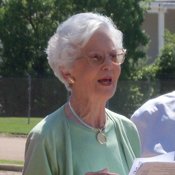 Habitat for Humanity Metro Jackson dedicates its 500th house tomorrow at an event honoring Elise Varner Winter. The nonprofit group built the house in honor of Winter, a founding member of the organization's board of directors. She is also a lifetime member of the board.

Winter, wife of former Mississippi Gov. William Winter, as recently as last week raised money for the organization when she donated proceeds from her book, "Dinner at the Mansion" (Yoknapatawpha Press, 2010, $29.95), to the nonprofit.

In October, Habitat held its 25th Anniversary Gala, again honoring Winter and her work in starting the organization in the metro area and continuously supporting it since 1986. The proceeds from that affair went toward building the Habitat chapter's 501st house.

The Carolyn Martin family is the new owner of the 500th house at 818 Stonewall St. After the dedication at noon, Habitat for Humanity Metro Jackson hosts an open house in the McRae Building at 615 Stonewall St.

Several professionals sponsored building the Martin's home, including lawyers from the firms of Jones, Walker, Waechter, Poitevent, Carrere and Denegre; and Watkins, Ludlam, Winter and Stennis.