How to Win (or Lose) an Election | Jackson Free Press | Jackson, MS

How to Win (or Lose) an Election 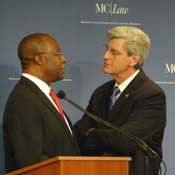 Johnny DuPree faced an uphill battle in his race for governor this year. As a Democrat running in a state trending more Republican, an African American where people often vote along racial lines and a mayor without the state-level political experience of his opponent, his chances were slim.

Having one-seventh of the funds that his opponent had didn't help, either.

Lt. Gov. (now Gov.-elect) Phil Bryant, on the other hand, was already in a state-level position. He was practically the default successor to the popular Gov. Haley Barbour, who himself was a national Republican Party insider. The national party and the friends Bryant made through his years in Mississippi's political scene helped him build his campaign war chest.

Through Oct. 29, when candidates turned in their pre-election campaign finance reports, Bryant had spent more than $5.5 million on his campaign, while DuPree had spent less than $750,000.

The two candidates also had dramatically different pools of resources at the beginning of the year. At the end of 2010, Bryant had a little more than $2 million waiting to be spent. Through October, he raised almost $4.3 million to add to that. His biggest contributor was the state branch of the Republican Governors Association, RGA Mississippi PAC, which contributed $575,000.

Most of what he received from his second biggest contributor came in the form of donated office space. DuPree himself was his third-largest contributor, donating more than $54,000 to his campaign.

Candidates must file their final campaign-finance reports Jan. 10. Those will cover contributions and expenditures from Oct. 30 through Dec. 31.

We Democrats have to do better. We at least have to run somebody in every race. However, I doubt it will matter. The south is still the south. The past is not even the past.