Angel of the Court 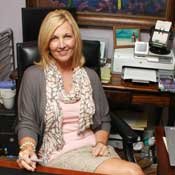 Sandy Middleton, executive director of The Center for Violence Prevention in Pearl, presented the center's annual Angel Award to the Clinton Municipal Court this week.

When it comes to domestic violence, the best defense is an orchestrated, integrated justice system. That's the kind of system that earned the Clinton Municipal Court this year's Angel Award from The Center for Violence Prevention on Tuesday. The CVP is a Pearl non-profit that provides shelter and advocacy for domestic-violence victims and an offender-intervention program.

CVP Executive Director Sandy Middleton said that the Clinton court has worked with the group to provide a seamless response to domestic-violence cases.

The court recognizes the need to provide safety to victims, while putting the batterer's intervention program into its sentencing toolkit for offenders.

Every aspect of the Clinton justice system, from police and prosecutors, court clerks to judges, has received training on the causes and cures for domestic violence. Everyone works hand-in-hand to curb domestic abuse in the Jackson suburb. The court has even set aside one day a month on its busy calendar to deal specifically with DV cases. That allows representatives from the center to be on hand to talk with victims, offenders, and prosecutors immediately and provide their recommendations.

"They pulled together all the necessary elements to have a coordinated response," Middleton said. "It's just working so beautifully. ... Everybody's plugged in and trained."

While it's too early to gauge whether the response is lowering the incidence of domestic-violence cases in the community, Middleton said that batterers in Clinton who have gone through the center's intervention program have had zero recurrence.

"The judges and I are just thrilled over the recidivism rate," Middleton said.

Judge Steven Price Nixon agreed with Middleton. "We sincerely appreciate the Center's efforts in helping to prevent recidivism in domestic-violence cases and in seeking to deal with the root issues that lead to domestic violence," he said in a statement.

"We have had notable success with their program, as reflected by the low rates of recidivism we see in our court, and we look forward to continuing to work with them in the future."

The CVP's 24-week batterer's intervention program, or BIP, is based on the Duluth Model, first implemented in Minnesota in 1981. The model provides a blueprint for community response and inter-agency coordination to stem the tide of domestic violence. It recognizes that social and justice systems work best together to protect victims from ongoing abuse, which is the overarching goal of every action within the model.

For example, police, prosecutors, and judges need guidelines and training to respond to domestic-abuse situations appropriately. Offenders need to be put behind bars when necessary, or be put into programs designed to give abusers the opportunity to change. All the while, social agencies provide victim safety and advocacy.

It is this model that Clinton has taken to heart. Clinton municipal judges order abusers to take part in the intervention program, intended to confront abusers with their behavior and allow them to take responsibility and break the cycle of violence.

The classes delve into abusers' beliefs and show them how they use intimidation and emotional and economic abuse to control their victims.

"It just works. If you can change the behavior and change the beliefs, the deep-seated beliefs of these offenders that they have a right to treat other people like that, then it's magical," Middleton said. "They don't do it any more. They just stop. ... It's powerful."

She added that when victims see that they have the justice system behind them keeping them safe, they respond. "There's a spirit of really wanting to empower the victims, which makes all the difference in the world," Middleton said.

It's Not Your Fault
If you are the victim of abuse:

• You did not cause the abuse.
• No one has the right to abuse you.
• Know that most children raised with abuse learn to use violence as one way to control others by using power and force.
• Know that relationships based on fear, power and control are abusive.
• Know that others understand why you would want to stay and that leaving a relationship is not easy.

Source: The Center For Violence Prevention