Clinton Municipal Court is an Angel 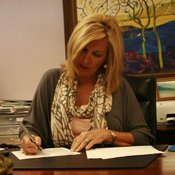 Sandy Middleton of the Center for Violence Prevention says the Clinton Municipal Court is an angel.

Victims of domestic violence have a strong resource in the Clinton Municipal Court.

"This award is symbolic to the Center for Violence Prevention in a variety of ways," Sandy Middleton, CVP executive director, said in a statement.

"Not only does it illustrate our pride in Clinton's Court performance, but also, it gives us hope and strength to continue what we do. Domestic violence is not going away and deserves very serious attention. We are so thankful Clinton Court is helping us in efforts to keep victims safe, in addition to vigorously hearing domestic violence cases and encouraging intervention programs for abusers."

The feelings are mutual. "We sincerely appreciate the center's efforts in helping to prevent recidivism in domestic violence cases and in seeking to deal with the root issues that lead to domestic violence," Judge Steven Price Nixon said in a statement.

"We have had notable success with their program, as reflected by the low rates of recidivism we see in our court, and we look forward to continuing to work with them in the future."

With the help of the CVP, Clinton Municipal Court officials and others have a new insight into the dynamics of domestic violence, which changes the impulse to blame victims, Middleton stated. "In every instance of domestic abuse, offenders decide to abuse. Violent episodes are not caused by alcohol, drugs, or stress but are simply excuses to justify the behavior," she said.

"Clinton's judges and court officials concede that domestic violence is not a one-time loss of control, but rather a mechanism of ongoing power and control," said Middleton.

With that perception in mind, Clinton officials do not hesitate to order jail time or participation in the center's Batterer's Intervention Program, Middleton said. The center serves about 100 offenders in a program based on the nationally successful Duluth Model that demands accountability from offenders, while teaching non-violent behavior, Middleton said.

"Recidivism rates for program participants are less than 1 percent, proving that the behavior modification works, as long as courts stand behind it," she said.

The Center for Violence Prevention advocates that every person has the right to life free from violence. The center offers survivors a crisis line, emergency shelter, and a full service advocacy program, while operating a successful offender program. If you need help, or for more information, call 601-932-4198 or 800-266-4198.