One Fork at a Time | Jackson Free Press | Jackson, MS

One Fork at a Time 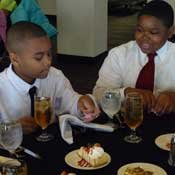 About 30 students from Chastain Middle School filed into The Penguin Restaurant, dressed in collared shirts and ties or dresses and bows. They politely took their seats at tables arranged around the room, then fiddled with an unfamiliar number of forks and glasses.

Waiters in pressed, white shirts poured sweet tea, and some students poured in more sweetener and sugar. Uncertain of what to do with the empty sweetener packets, several of the students turned to their neighbors for guidance and finding none, piled the little pink packets inconspicuously at the edge of their place settings.

Although the exact protocol for disposing of sweetener packets may have eluded them, the students quickly picked up on etiquette tips, courtesy of John Hardy, the restaurant's general manager, to supplement what they had already learned at school.

"When you eat, you're not supposed to put your elbows on the table, because it's rude," said Carrick Thomas, one of the students from Chastain. "And if the food's not close to you, you can ask somebody to pass it."

About 30 students from Chastain's gifted program attended the etiquette lunch Nov. 30, sponsored by Mississippi State University's Central Mississippi Alumni Association. Businessman Jonathan Lee, who is on the board of the alumni association, talked to the students about MSU's honors college and the importance of getting a good education. Mount Helm Baptist Church pastor CJ Rhodes also talked with the students.

Before the soup course arrived, Hardy gave the students an abbreviated course in fine dining etiquette.

"The napkin remains in your lap for the duration of your dining experience," he told the students, explaining that under no circumstance should they ever place their napkins in the seats of their chairs.

"Because what goes in your seat?" He asked. The students replied with giggles, unsure of the polite answer to that question.

"It's not very sanitary," Hardy said. If you have to leave the table, place the napkin to the left of your plate.

Besides explaining which fork to use and how to pass the butter, Hardy demonstrated how—and how not—to hold silverware.

"If you have been using the toothbrush hold, stop today!" He said. Proper etiquette says you should hold a fork almost like a pencil, rather than clutching it in your fist. "When we know better, we do better," Hardy said.

Thea Faulkner, a Chastain parent and coordinator of the Parent Leadership Institute at Parents for Public Schools, organized the event. She said the goal of the lunch was to tell the students about the importance of setting high academic standards and going to college, perhaps in an honors program.

Some students have higher aspirations in mind. Ryan Nichols, one of the Chastain students, said the etiquette lessons will be useful when he goes to formal restaurants in the future.

"If I'm trying to meet somebody who is very important, like the president or something, I would want to go to a restaurant like this," he said.

Etiquette Tips from John Hardy
• Use silverware beginning with the farthest away from the plate and work your way in. The smaller fork is for salad and dessert, while the larger one is for the entrée.

• Cut no more than three bite-size pieces of food at a time. This keeps the entrée from getting cold.

• When bread is served, break off one piece at a time and butter it. Don't stuff an entire roll in your mouth.

• Don't blow on your soup to cool it—it might splatter on your neighbor! Instead, let the soup rest in your spoon and enjoy some polite conversation as you wait for it to cool.

• Dispose of chewing gum before you get to the table.

• Wait until everyone at your table is served to begin eating.

• Don't carry on a phone conversation at the table. If you have to take a call, excuse yourself and leave the room.