Not Giving Up on Jackson Kids 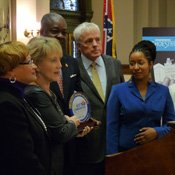 Jackson struggles with a graduation rate below the national average, but the community is not giving up on its students, an organization started by Colin Powell says.

America's Promise Alliance named the city a Grad Nation Community and one of the 100 Best Communities for Young people in 2011. The award recognizes the work of organizations in Jackson to improve high school graduation rates and other factors to make the area a better place for young people.

At a press conference at the state Capitol this morning, Tanya Tucker, senior vice president of community engagement for America's Promise Alliance, said Jackson is truly living out what community is all about.

"This (award) isn't really about recognition for one program or one initiative; it's about a community coming together to help young people," Tucker said.

Donna Barksdale, a board member at America's Promise Alliance, presented the award to Mayor Harvey Johnson Jr. and representatives from United Way of the Capital Area, Operation Shoestring and other community organizations.

The mayor issued a proclamation celebrating Jackson as one of the 100 Best Communities for Young People.

"(I want to say) how pleased I am with the coalition that has been formed to prevent dropouts here in the capital area," Johnson said.

Organizations working to keep Jackson kids in school face high hurdles. In 2009, Jackson Public Schools had a graduation rate of 74.1 percent. This year, however, the graduation rate had dropped to 63.6 percent. Studies from the past few years have put the national graduation rate at 71 to 74 percent.

Robert Langford, executive director of Operation Shoestring, said that while Jackson faces challenges, the award recognizes the hard work to make the metro area a better place for children.

"Thanks to all of you, Jackson is such a community," he said.

Read more about the America's Promise Alliance award and the importance of raising graduation rates in the Jackson Free Press report on the dropout-crime connection.