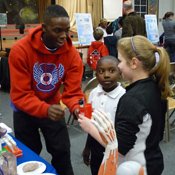 Tougaloo freshman Roosevelt Parker, left, shows third-graders Xavian Branch, center, and Jessica Shelton how much sugar is in a cup of soda.

William Johnson III, a third-grader at Casey Elementary School, looked skeptically at the rubbery, gray sheep's brain displayed on a Styrofoam plate. Tentatively, he poked at it, then turned around and shouted excitedly for his friend.

Students got hands-on experience with math and science last night at Casey, where local colleges, parents, students and professors in those fields came together to get children excited about brain anatomy, synthetic materials and other areas of study in science and math.

Belinda Johnson, William's mother, and Stephanie Ivy, whose son, Christian, is in the fifth grade at Casey, organized the event after attending the Parent Leadership Institute through Parents for Public Schools. Ivy said she wanted to expose the students to different professions and areas of study in math and science that they might not hear much about in school.

"My interest was science education--trying to get students interested in science and making it part of the norm," Ivy said.

The two women spent about a year planning the event and getting people from area colleges, businesses and nonprofit organizations involved. Students at the fair could go to about six different stations set up in the library and learn about anatomy, how eyes work, reading nutrition labels, calculating averages and more.

After visiting the different tables set up around the room, several of the students talked excitedly about the different things they could do with science when they grow up.

"I want to be an engineer and a scientist, and I'm also going to be an adventurer and a deep-sea explorer," said Xavian Branch, a third-grader. At the math and science night, he learned about the different parts of the body from students from Tougaloo College. His eyes widened in shock when he found out how much salt was in an order of small fries from McDonald's and how much sugar was in a cup of soda.

Jessica Shelton, one of Xavian's classmates, said she wanted to be a marine biologist because she likes helping the sea creatures she sees at the beach. As for what she learned at the event, "You can touch brains!" she said.

See more photos of the event in the JFP photo gallery.

This story is just delightful. Yay, Elizabeth. All, don't miss the link just above to the photo gallery. Adorable pictures!