Lewis Prepares for the Future 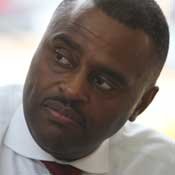 Hinds County Sheriff-elect Tyrone Lewis is celebrating his win in the primary election and looking ahead to taking office in January 2012.

"I want you to know, I didn't start off running for sheriff to be the first black sheriff; I aim to be the next best sheriff," Lewis told supporters. He added, however, that it was not a coincidence that the reception fell on the same weekend as the 48th anniversary of Martin Luther King Jr.'s "I Have a Dream" speech.

"You are looking at a part of his dream," Lewis said, adding that he intends to be "the sheriff for everybody."

Lewis is a former Jackson police officer and acting police chief, appointed by the late Mayor Frank Melton. He ran an aggressive grass-roots campaign, collected endorsements from city and community leaders, and used social media to build up support. Lewis defeated longtime Sheriff Malcolm McMillin in the Aug. 2 Democratic primary by slightly more than 2,000 votes. He does not face a Republican challenger in November's general election.

After days of ballot questions, McMillin issued a statement conceding the race Aug. 11, which said some people campaigned for Lewis "on their view that Hinds County now needs a black sheriff--a requirement I obviously could not meet."

Although Lewis' supporters repeatedly said the celebration was not about him being black, and Lewis pointed to the fact that people of several races were present, the audience was overwhelmingly black. Othor Cain, managing editor of the Mississippi Link, told the group that Lewis' campaign was "above board," and they should embrace the fact that they had elected a black sheriff.

"I've always known that Hinds County was large enough with African Americans to have a black sheriff, so why not celebrate this man for who he is tonight?" Cain said. "Don't be ashamed of that, don't be afraid of that. Celebrate your blackness--it's a good thing."

Terris Harris, the master of ceremonies, said Mississippi and Hinds County have come a long way.

A representative for Johnny DuPree, Democratic candidate for Mississippi governor, was at the reception to congratulate Lewis. Dennis Sweet, a Jackson attorney who hosted the event, told people that if they are Democrats, DuPree needs their support.

During the event, supporters repeatedly said Lewis can "clean up Hinds County and Jackson." Lewis promised to work with other law enforcement agencies in the area and with the community to reduce crime.

"For those individuals that have been creating havoc in this community, we will defeat you. ... I-55 runs north and south, I-20 runs east and west. Take your choice," he said. "For those of y'all that are looking for safety and peace, we've got your back."

Lewis told the Jackson Free Press that his transition team is gathering information to see what is working and what is not, so he has not made any personnel decisions, yet.

"I can tell you this--this community voted for change, and they wanted change, so I'm going to give them change," he said. "If that encompasses making changes inside of the department, then that's what we're going to do. But we know they wanted change to feel safe and to be safe in the community, and we're going to give them that as well. We have to make sure we have the right people in place to make sure they get that."

Lewis said he does not know of anyone specific who he wants to put in place, but he is not in a hurry to make staffing decisions.

Two days later, on Sunday night, Clinton police arrested Aaron B. Banks, Lewis' campaign manager, for driving under the influence. Banks was charged with first-offense DUI after he was involved in an accident on Clinton Parkway in which alcohol was present, Clinton Chief of Police Don Byington said. Banks has also been charged with contempt of court for failure to appear in court for an earlier traffic citation, Byington said. There were some injuries in the accident, Byington told the Jackson Free Press, although he did not know the extent because the police report was not ready as of Tuesday.

Lewis referred questions about the arrest to Banks or his attorney. He said everyone is accountable for their own actions, and he has "moved from campaign mode to transition mode."

Abundant Spirit Glory Empowered Church on Cooper Road in Jackson lists "political consultant and grass-roots organizer" Aaron B. Banks as its pastor, but the church would not comment or confirm the connection. Banks did not respond to phone calls.