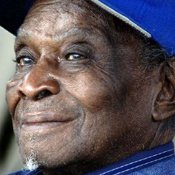 One of the "Last of the Great Mississippi Delta Bluesmen" has passed. David "Honeyboy" Edwards, 96, died yesterday at his home in Chicago, Ill.

His webiste reported that he died at 3 a.m. Aug. 29. "Honeyboy moved on to blues heaven. He lived a long, full life, and he felt at peace," the statement reads. The New York Times, the Chicago Tribune, the Los Angeles Times and many other national news outlets are running his obituary today.

Edwards' last performance was April 16 and 17 at the Juke Joint Festival and Cathead Mini-Festival in Clarksdale, Miss. His health got worse soon after that. He had planned to play gigs in Chicago, as well other U.S. concerts and European shows.

"He maintained a strong spirit until the end, telling stories and showing off his dexterity in his hands," his website reports.

Edwards was born June 28, 1915 in Shaw, Miss. Edwards, one of the original acoustic Delta blues players, was one of the last living links to another blues great, Robert Johnson.

In 1942, Alan Lomax recorded Edwards in Clarksdale, Mississippi for the Library of Congress. He recorded a total of 15.

Edwards didn't record again commercially until 1951, when he recorded "Who May Your Regular Be" for Arc Records. He also cut "Build A Cave" as 'Mr. Honey' for Artist.

Moving to Chicago in the early 1950s, Edwards played small clubs and street corners with Floyd Jones, Johnny Temple, and Kansas City Red. In 1953, he recorded several songs for Chess that remained un-issued until "Drop Down Mama" was included in an anthology release.

In 1972, Honeyboy met Michael Frank, and the two soon became fast friends. In 1976, they hit the North Side Blues scene as The Honeyboy Edwards Blues Band, as well as performing as a duo on occasion. Michael founded Earwig Records, and in 1979 Honeyboy and his friends Sunnyland Slim, Kansas City Red, Floyd Jones, and Big Walter Horton recorded "Old Friends".

Edwards' early Library of Congress performances and more recent recordings were combined on "Delta Bluesman," released by Earwig in 1992.

Visitation will be 6-9 p.m. Thursday, Sept. 1 with an open mic for comments by his friends and fans from 7-8 p.m. at McCullough Funeral and Cremation Services, 851 E. 75th St.,
Chicago, Ill. Private services will be held Friday, Sept. 2.