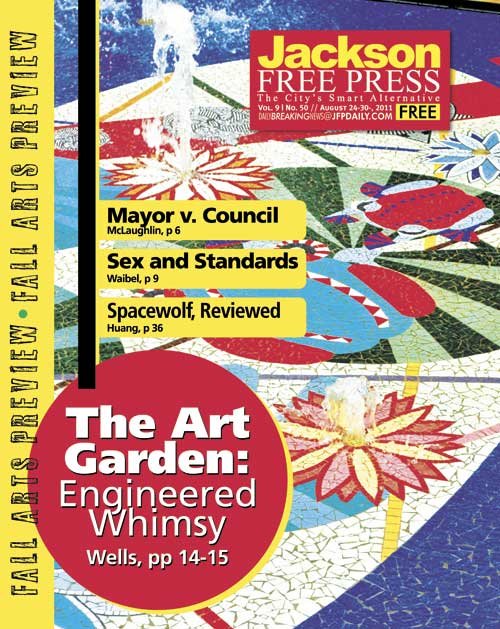 Betsy Bradley stepped into the construction zone in high heels, looking back at a group of curious art lovers. Behind her, more than 30 adults holding wine glasses and beer bottles followed. The new, wide sidewalks stood higher than the rectangular patches of orange dirt. Bradley, executive director the Mississippi Museum of Art, stopped where the sidewalks radiated out to different points of downtown Jackson. She calls these sidewalks the bones of the still-emerging Art Garden. On this hot summer evening, she took members of the museum's New Collectors Club on a field trip of the garden's backbone.

"Oh my goodness, we've been wondering what's back here," a woman in a sundress and sandals said.

"Betsy, what is this?" another woman asked, pointing to a large concrete cube with exposed hardware jutting out.

"Betsy, what is that?" asked a man dressed in shorts. He wanted to know more about the engineering specifications and how another concrete rectangle would function.

She didn't respond, but waited until she could get most of the group's attention.

Then Bradley showed them where they will soon see murals and where they will hear concerts on a performance stage large enough to accommodate an entire symphony orchestra. The slightly terraced park has levels for daily outdoor dining, well within sight of the garden's art. Bradley showed the New Collectors where airships will sail and where rooms with tree walls will change shape with each season as the flowering crab and Japanese cherries come into bloom. She told them this park will be much more than green grass, 61 steel trays of flowers and concrete outlines.

"This park is a clearing in a forest," Bradley told them. "Ed Blake said that."

Blake, a Hattiesburg landscape architect who died in 2010, was an expert on public green spaces. Back in 2005 and 2006, he helped a museum committee formulate a vision for a garden meant to go with the new museum, which was built in 2007. Blake, when advising the committee, stressed the importance of public spaces throughout history. Even before the first ancient cities, Blake said, humans on long journeys would come to an open space and take time to pause, celebrate and socialize.

That's exactly what Bradley and the museum supporters want to happen Oct. 1 at the inaugural Town Creek Arts Festival. Artists, craftsmen, food and entertainment will fill the geometry of the new green space, beginning at 10 a.m. and lasting into the evening hours. Ballet Mississippi and The Front Porch Dancers will dance in celebration. The festival will be the first chance for many to visit the green public space filled with the creations of Mississippi artists Ed McGowin, Martha Ferris, Fletcher Cox and Jennifer Torres.

McGowin designed four large stone-cast columns for the garden that resemble fat, tapered ancient Egyptian columns. A wide band of bronze-relief sculptures wraps around each column. The columns depict images of Mississippi wildlife, literature, music and food. The food column contains a virtual recipe of McGowin's mother's gumbo with 12 crabs, four bell peppers, okra and Worcestershire sauce. It even depicts a bag of flour with a scoop that a park visitor can grasp.

He also designed the bench tops for the park, using the same motifs that will flow from one design to the next. The relief sculptures are nearly two inches high in some places.

"The values change in shadow and in sunlight," he told the art lovers. At different times of day or seasons of the year, the gumbo ingredients will create new pictures.

Early in the planning process, a climatologist charted the entire park, marking hot spots and windy spots. McGowin's columns open to the tree-rooms in the north part of the park. The eastern edge tends to be windiest. That's where tall, steel boat sculptures will catch a breeze and spin, reflecting light shapes.

Torres, an art professor at the University of Southern Mississippi, created the nine large metal sculptures in her Hattiesburg studio. The boat sculptures will top poles at heights varying from 7 feet to 12 feet, tall enough for a grown man to walk under one safely and maybe, if he feels inspired, reach up and lightly spin it.

During the July 20 evening tour of the art garden, Torres snapped cellphone pictures of Vicksburg artist Ferris near the completed mosaic wading pools. Ferris, who brought Torres into the project to collaborate on an alligator bench, designed the mosaics with images of flowers, snakes, frogs and turtles. The backs of the turtles' shells are Choctaw basket patterns. Water bubbled from the center of mosaic lilies. The two women laughed.

Her inspiration for her "play ponds" came from Italian gardens she visited in Tuscany. The whimsy of mosaic and water together appealed to her.

"I grew up on a farm, swimming in ponds, seeing snakes, turtles and frogs," she told the art lovers.

Ferris explained how the mosaic was fabricated in New Hampshire and brought to Mississippi. The pallets of panels sat in the heat and then the rain, causing a few complications. She said she was pleased at how it all—from concept to technology—came together.

While Ferris and the rest of the group moved away, Torres hung back, took her sandals off and dipped her toes in the pond.

Bradley herded the crowd back into the air-conditioned museum to hear the other artists describe their process of planning, designing and consulting with engineers on the feasibility of their vision.

Cox opened rolls of torn, thin paper with delicate drawings that no one in the back of the room could see. He explained how he created the idea for the proscenium arch that will frame the performance stage. The challenge was to create a functional structure 22-feet high that could bear a ton of light and sound equipment. He began early in the process to sketch biomorphic shapes.

"I knew early on it was going to be use steel," Cox said. He looked at more unrolled drawings. "I started disliking biomorphic." He came up with a scale drawing he liked better, and showed it to fabricator Steve Norquist. Cox asked him if he could build the arch in the scale drawing.

"I said, 'We can do it, as long as you can pay for it,'" Norquist said. It would take a lot of pipe with an almost 11-inch radius. Structural engineers calculated the loads and curves. Other engineers doubled-checked the physics and math. "That's how design works in real life," Cox said.

The small model—only about 5 feet tall—looks like an old, thick and twisted wisteria vine or low-hanging and long-reaching gnarled branches on ancient magnolias in some forgotten forest.

"This thing has some amazingly sensual curves in it," Norquist told the art lovers. "It has some sexy turns.

Over the laughter, Bradley spoke loudly from the back of the room. "Fletcher, I don't think you said what its name is," she said.

Cox smiled and said, "The noodle."

"I wonder if it will still be called the noodle after that description," Martha Ferris said.

Bradley said the museum still needs $1 million to cover the garden's $5.6 million bill. Events to help raise part of the funds are in the works, including "An Evening in the Garden," 6-10 p.m. Sept. 29.

MMA Executive Chef Luis Bruno is in charge of the sit-down dinner for the gala. The Mississippi Symphony Orchestra will perform excerpts from "Sunday in the Park with George," the 1984 Stephen Sondheim musical inspired by the impressionistic painting "A Sunday Afternoon on the Island of La Grande Jatte" by Georges Seurat. Tickets are $150 per person and $300 per couple.

The Art Garden replaces a parking lot, worrying some drivers about where to leave their cars so they can enjoy the public space as well as the art inside the museum. It's a misconception that visitors won't have a place to park, because the Art Garden plans included new parking surrounding the block that results in at least five more parking spots than before.

MMA leases its property at 380 S. Lamar St.—the garden and the building—from the city of Jackson. The new park will connect the museum to other city structures: the Arts Center of Mississippi, the Russell C. Davis Planetarium and Thalia Mara Hall. A flowering wall of confederate jasmine and climbing roses will screen Thalia Mara's loading dock from the park. From across the street, visitors on the second floor of the Jackson Convention Center will look out at flowering galleries and an alley of trees.

"This is much more than grass, flowers and concrete," Bradley said. "Artists are core to this garden."

For information, go to http://www.msmuseumart.org. To find out more about the whimsy that is Jackson, visit our Culture blog for more discovery of art. Or if you're into music, visit the Music blog for the latest on Jackson's music scene. If you know of a local artist or musician whom we should know, let us know and add that to Jackpedia.