Candidate of the Day: Cindy Hyde-Smith 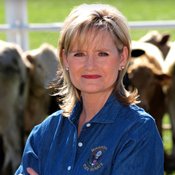 Tuesdays are always big days for Hyde-Smith, 52. Her family's Brookhaven livestock business rotates around taking cattle to auction at the stockyard every Tuesday. Her daughter, Anna-Michael Smith, 12, helps with that routine.

Hyde-Smith became a state senator the same year Anna-Michael was born. She's represented Lawrence, Lincoln and Simpson counties for 12 years. For eight years, she's been chairwoman of the agricultural committee in the Senate.

"We make our living full-time from agriculture," she told a crowd at the Neshoba County Fair last week. "We have had a cow farm and a stock yard since 1942." She and her husband, Mike Smith, are fourth-generation farmers. She said one in four Mississippians makes a living in agriculture. "My child is looking for a future in agriculture," she said.

Hyde-Smith is most passionate when addressing private property rights.

"Let economic development start with the land owner," she said at the fair. "If you have a deed to something, that should mean something, and that is your land and no one should take it for private use." The Mississippi Farm Bureau named Hyde-Smith legislator of the year for her stance against the state taking private land and giving it to private companies.

The commissioner heads the Department of Agriculture. Many of the duties of the regulatory agency involve proper calibration of weights and measures, even including gas pumps. The department also conducts meat inspections and other food safety checks.
In May, Hyde-Smith testified before the U.S. Department of Agriculture's Food Safety and Inspection Service about the need to inspect domestic and imported catfish.

The commissioner also oversees the agricultural theft bureau. "Folks, we still have cattle rustlers out there," Hyde-Smith said at the fair. She also talked about using GPS technology to find stolen tractors.

Hyde-Smith graduated from Copiah-Lincoln Community College and the University of Southern Mississippi.

Umesh Sanjanwala, spokesman for the Hyde-Smith campaign, said voters this summer asked a lot of questions about ethanol and biofuels.

"A concern about ethanol is that it raised the price of corn that you feed to livestock," Sanjanwala told the Jackson Free Press. Yet, Hyde-Smith recognizes a need and a desire to use some kind of biofuel, he said. "She is looking at other options--a cellulose-based fuel."

Sanjawala, a Department of Agriculture employee, met Hyde-Smith last year. "She's been instrumental in keeping this agency going," he said. "She's a hard worker who is focused, meticulous and driven. She really wants to make a difference. I really admire her passion."