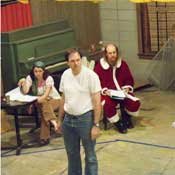 Multiple voices filled the pale green room at a rehearsal for "Assassins," a Stephen Sondheim musical about presidential assassins with a carnival theme. Five people with open notebooks sat around the piano at the Warehouse Theatre on Monroe Street, New Stage Theatre's new space in Belhaven. Mandy Kate Myers stood in a flowing turquoise dress and began belting out melodic notes. You'd never know that this was her first time seeing the music.

Other than their musical talent, everyone looked and dressed like people one would meet at the grocery store or see filling their car at a gas station. But these are members of the Fondren Theatre Workshop, a theater group that draws from the community for its performances. In addition to not having set directors, cast or production staff, this theater also has no permanent space, so FTW "borrows" unlikely places such as The Cedars or Rainbow Natural Grocery Cooperative. The group frequently puts on its productions as benefits for non-profits.

In 2003, John and Diana Howell felt the need for a community theater in Jackson. Both had theater backgrounds, and they saw no real outlet for novices or amateurs to participate in theater other than being an audience member. FTW got its inspiration from the Renaissance Theater Workshop, a Jackson-based theater group that existed from 1997 to 2001. Tim Hedgepeth, once the executive director of the Mississippi Arts Commission in Jackson, established Renaissance as a base for area artists to produce original scripts and perform classic plays.

The Howells built off this philosophy and in May 2003, they put on "Through the Looking Glass." Denise Halbach, Boyd Campbell and Sam Sparks joined with the Howells to perform "The Lion in Winter" in November 2003 to fully launch the Fondren Theatre Workshop.

FTW bands together when an interest arises and sends out notifications for production help. "We work with and through the community," John Howell said. The group holds open auditions and invites everyone. Once it has assembled enough cast and production members, FTW begins planning the performance space.

With limited organization, FTW has no limits on the types of productions it chooses, including plays and musicals that may be considered "adult" oriented, such as "The Vagina Monologues" and the upcoming "Vampire Lesbians of Sodom." It is also an outlet for new artists to work in the theater and for audiences to see and hear new plays. Through that, FTW builds off the community's interest, not tying it down to conventional plays. "We bring an expanded repertoire of material," Howell said.

The group will stage "Assassins" for the first time ever in Jackson because FTW members responded to the interest of its director, Jerry Farley, who is also New Stage Theatre's production manager.

"We want to develop local talent and promote the community," Howell said.

The Fondren Theatre Workshop is not a professional group of actors with a strict organization. Rather, it is a vehicle for those in the community, experienced or not, to be involved, whether they are interested in acting, writing or directing. "It is an arts outlet with many ways to participate," Howell says. "... It has accelerated the energy in Jackson."