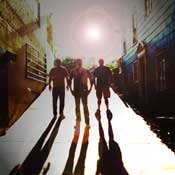 "Spacewolf," released in May 2011, is the first album of the band Spacewolf, made up of guitarist-vocalist Drew Mc­Kercher, bassist Don Hawkins and drummer Murph Caicedo.

Each of the band mates, who are all in their early 30s, hails from a different place. McKercher was born in Idaho but grew up in Vicksburg; Hawkins was born and raised in Ocean Springs; and Caicedo was born in the Pacific Northwest but moved to Pearl as a middle-schooler. Outside of making music, McKercher is the ops manager at a musical instrument retailer, Hawkins is the traffic manager at an advertising agency, and Caicedo is a percussionist for the Belhaven dance department and is working at Malaco Records during the reconstruction process after it was destroyed by a tornado last April.

Despite the band mates seemingly unconnected backgrounds, they join together to create cohesive sound and mature tone, unafraid to take risks.

The album, produced by Spacewolf and Kent Bruce of Malaco records, comes with a maturity uncharacteristic of a "first" album. Having been together for a little over a year, Spacewolf can deliver and intrigue. The band combines classic rock, experimental instrumentals and subtle pop. This album isn't amateur—it's much more than that.

The album starts off with a hazy listlessness. "Wolf" and "Mental Needles" creep along with a downbeat trod, but they don't sacrifice musical integrity to fall into the category of the weary, emotionally distraught song. Rather, "Wolf" has a running pop-like tune, if a little bit monotonous, and "Mental Needles" feels likes grunge mixed with progressive rock. The music doesn't sound like a straight garage band, which is rather pleasant.

The next part of the album, which has only eight songs for a total of 30 minutes, adopts a catchier tone. "You Can't Like Everything About Everybody, All The Time," is a thrilling rock song with glamorous ascending guitar riffs and quirky lyrics. It gives an unexpected turn from the mood it first sets, bolstering the band's strength of diversity.

A downside that plagues this album, unfortunately, is the moments of monotonous singing. While the instruments are sharp, Mc­Kercher's voice never really changes, even across songs. Without paying attention, some may mistake songs like "Millionth" and "Static" to be one, perhaps merely noticing a change of rhythm. It would have been refreshing to hear his vocals carry more distinctive tones throughout the record.

One starkly different song—you could even say contrasting—is ". . . " (yes, that's the name of the track), a recording of what seems to be the band warming
up. The crescendo of sound transitions from piqued to slightly unsettling. This is what is fascinating about this band. The diversification of this album, whatever genre it may be (because at some point it can become muddled), should catch listeners, reel them in and maybe even mesmerize them.

This album surprised me with the band's talent and clear musical production. Spacewolf is currently touring the southeast, but if you're looking for great locality, "Spacewolf" delivers without stumbling in the mud.

Catch Spacewolf playing Sept. 24 at Sam's Lounge with Baak Gwai; Aug. 27 at the second annual Sneakyfest at Sneaky Beans; and Oct. 20 at Hal & Mal's at
the Chuck Palahniuk book signing event. Visit their Facebook Page for more updates and info.