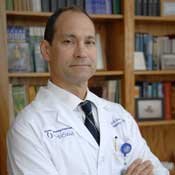 Dr. Alexander P. Auchus is the only certified geriatric neurologist in the south.

An aging brain can be frightening. Many of us fear succumbing to Alzheimer's disease or yielding to dementia.

Dr. Alexander P. Auchus sheds some light on the matter. Auchus, 52, is the McCafty Chair of Neurology at the University of Mississippi Medical Center. He was elected to the American Neurological Association in July. Not only is he an expert neurologist, but he is also the only certified physician with his specialty, geriatric neurology, in the South.

Is there anything a person can do to not be affected by a loss of brain function?
Well, the easiest is don't get older, but most people don't want to hear that answer. Aging in a healthy fashion is kind of your question as opposed to having the brain age in a fashion susceptible to various diseases.

... Think you're not as quick as you used to be? That's not necessarily abnormal, that's just part of the aging brain. But when you do start having an inability to function in the real world, needing other people to help you with basic functions, and you can't really be independent anymore because your thinking has gotten bad—now we start calling that dementia.

... Stroke is an area of injury to the brain usually because one of the arteries feeding the brain got blocked. The blood to that portion of the brain is stopped because of blockage, that's called an ischemic stroke. There's also a hemorrhage stroke where the brain vessel actually breaks and bleeding occurs.

What are some ways of maintaining good mental health?
Exercise, normal body weight, management of those risk factors and then engaging the brain. Especially during your middle-age years, doing mentally challenging things, whether it's your occupation, whether it's your hobby, reading, another language, discussions of current events, social interactions—all of those things that keep us from being couch potatoes and instead engage us in the world and in one another are important for normal brain function. You can help reinforce the brain's connections and normal functions through these kind of activities so that if something like Alzheimer's disease happens when you're 70 or if something like stroke happens, your brain will be in a better state to absorb that insult. ... A weaker brain might default and fail and the patient (will) become demented quicker than a stronger brain.

What are some alternative ways of doing regular things that can boost brain power?
Engaging socially and reading (and) music—playing and listening. Remember, heart healthy is brain healthy. Not too much red meat and a variety of food groups. Eat a rainbow. That applies to brain health, meaning you like to see colors on your plate. Some green items, some blue items, some red items and not just southern-fried brown. Brown's not in the rainbow. All those kind of things that seem like what your mother would tell you are actually true.

What are some ways those with dementia or brain disease can cope with it?
Once dementia is present, it is difficult to reverse. Prevention of dementia is probably a better public-health strategy than to reverse dementia. Very few dementias can actually be completely turned around, but it can still be managed and improved in certain respects. In Alzheimer's disease, it's important to simplify the environment. Keeping a relatively consistent environment and daily routine helps (patients) to cope, and it doesn't challenge them with new information and new environment and changes that would be tricky. ... There are medicines to help Alzheimer's disease, too. They don't cure the illness, but they help change the brain's chemistry to help it be closer to normal. The patient can often remember better and function better when they're taking the medicines.