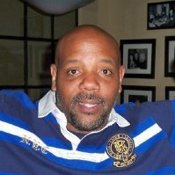 Andre Brown, 40, by all accounts was a man of good character, some would even say cool. He was a leader, a lover, a devoted father and one of the best people you will ever meet, friends say.

On Wednesday, Aug. 17, a truck headed on Interstate 20 east bound lost its trailer and struck two cars, including the one Brown was in. The utility pickup truck lost the trailer it was towing, which disconnected around 7:20 a.m., and crossed the median into westbound traffic. Brown was taken to the University of Mississippi Medical Center and died a few hours later. The driver may face charges for the death of Andre Brown.

Originally from Racine, Wis., Brown led a fruitful life in Mississippi. He had two gems in his life, his daughters N'dia and Raina, and worked at AT&T.

Fred Burns knew him as a brother and a leader at the Jackson State University fraternity Omega Psi Phi. "Andre was soft-spoken, kind of subdued, but he would always give you his best... He was a class act." Brown became president of the chapter of Omega Psi Phi, one of the largest and oldest fraternity chapter in Mississippi. "He was a definite leader... We thought highly of him, and that goes to show how he became president of a prestigious fraternity."

Burns recalls that the weekend before Brown's passing, he was giving back to the community. On the Walmart on Highway 18, Brown stood in the hot sun for a back-to-school function and cooked 5,000 hamburgers. "He was big on community... He loved to give back," he said.

Tracie James-Wade, friend and classmate at JSU, also knew Brown's inner strength and character. After all, they had spent their undergraduate and graduate school time together.

At JSU, Wade went through personal trials but Brown supported her throughout business school. "He helped me out....he encouraged me at points when I wanted to give up. He was a great guy...he was a people person, very laid back. Many described him as cool."

"I knew him for 12 years....you could say he was one of the people who left too soon. He will be missed," says Burns.