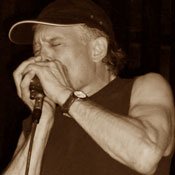 If you've ever heard Greg "Fingers" Taylor play the harmonica, you know that Jimmy Buffett owes much of his success to the Mississippi resident.

Taylor met Buffett in 1970 while they were both students at the University of Southern Mississippi. The duo worked on Buffett's first three albums, "Down to Earth" "High Cumberland Junkie" and "A White Sport Coat and a Pink Crustacean." In 1974, Taylor joined Buffett's "Coral Reefer Band" and hit the road. He continued to play in the band until 2000.

Taylor, 58, continues to play in local venues in Jackson where he brings a suitcase- sized box filled with various harmonicas. Over the years, he has also released his own albums: "Harpoon Man," "Chest Pains," "New Fingerprints," "Old Rock 'n' Roller," and "Hi Fi Baby."