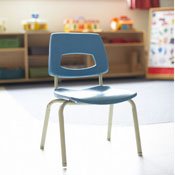 The study, released last month, chose 18 of the nation's largest school districts to determine middle- school disciplinary practices in large urban districts. That picture shows that since the mid-1970s, suspensions for all students have risen dramatically. During the past decade, black students got suspended more often than whites. The racial gap got wider, also.

Jackson Public Schools officials don't dispute that minority students are overrepresented in discipline figures nationwide, but point out that student population at JPS is 98 percent black.

"We pay special attention to racial disparity in suspensions," said Paula Van Every, director of the Safe Schools Healthy Students program at JPS.

The district is currently in the second year of the program funded by a $1.2 million federal grant, that provides training for teachers and extra personnel, such as counselors. It's collaborative program, including the city of Jackson, the Jackson Police and Hinds Behavioral Health Services. Van Every says a big emphasis of the program is keeping kids in school.

"We know we are on the right track," Van Every said.

While there's no evidence that removing misbehaving students improves school safety or student behavior, a there is evidence showing that middle school suspensions may have significant long-term repercussions on students, the SPLC study reports.