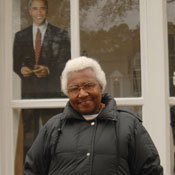 Dr. Helen Barnes, one of the first African American women to practice medicine in Mississippi, is featured in "A Portrait of Jackson Women."

A cardboard cutout of President Barack Obama smiles down through a window at a pleasant-looking woman standing in her backyard. She smiles and waits patiently, standing outside her sunroom in her jacket. She looks like someone's grandmother, someone's friend. Dr. Helen Barnes looks like someone you want to know and who might invite you inside.

That dog-walking encounter was four years ago. The realization that Barnes was a historical Jackson figure inspired Pound, 36, a photographer, to document lives of other legendary women in Jackson.

She told another photographer and lifelong friend, Leah Overstreet, 32, about the chance meeting with Barnes. They wondered how many other important Jackson women they might profile in a tribute.

"A Portrait of Jackson Women" is a multimedia documentary exhibit with large format photographs, audio and a short film. The photographers found 20 women in Jackson who changed history. They started with Barnes, and then photographed artist Mildred Wolfe and author Ellen Douglas.

"We started this just for us," Pound said. "We'd shoot one lady because she interested us. Then she'd tell us about somebody else."

Pound and Overstreet both grew up in Jackson and both attended Jackson Prep. Growing up, they had heard of some of the women, but not too much.

"I can't believe I didn't know about them. These people should be studied," Pound said.

"These women are so amazing," Overstreet said. "We started listening to Helen Barnes' story. We were blown away. It was an incredible story with all the craziness of the civil rights era and her spirit of wanting to help people."

Pound is constantly booked with wedding shoots around Jackson, and Overstreet works in New York City as a photo editor for MTV.

For the exhibit, Overstreet taped interviews with the subjects. She asked all 20 women why Mississippi is important to them. After the interviews ended, she spent many hours editing. She also made a short film about the 20 "strong women who did great things."

Overstreet wants to bring the exhibit to New York City to show this lesser-known side of history.

The project differs from the day-to-day work of the two photographers.

"With brides, I love to capture those moments at weddings when everyone is at their best," Pound says who has her own photo studio in Fondren. "But older women put life in perspective (when they say), 'This is what we want to do; this is how we made a difference.' It helps us with stuff we have to do every day to pay the bills."

She remembers when they asked arts supporter Sally Carmichael about time management. "How do you have time for it all?" Pound asked her.

Her response was blunt: "I don't play bridge," Carmichael said.

"If you don't do all the other stupid stuff, you have time," Pound said, interpreting Carmichael's words.

Mildred Wolfe also left an impression. "I wanted to be an artist; I didn't want to be just married to one," she told the women.

"Each woman has a different story," Overstreet says. "All these women gave back to the community. All have been a fabric, a life intersected through mutual friends and acquaintances. We saw connections as we put pieces together. All these women have done so much work that matters, it inspires you to follow your passion."

Overstreet's passion is creating projects like this one that consumed all her free time and took years to pull together. Still, she enjoys her professional life in New York City and doesn't foresee moving anytime soon.

"I'm taking it one day at a time," she says. "A lot of projects I do are down south. I do find myself coming home to  do projects."

"A Portrait of Jackson Women: Photography by Karla Pound and Leah Overstreet" opened Friday, May 14 at the Arts Center of Mississippi.